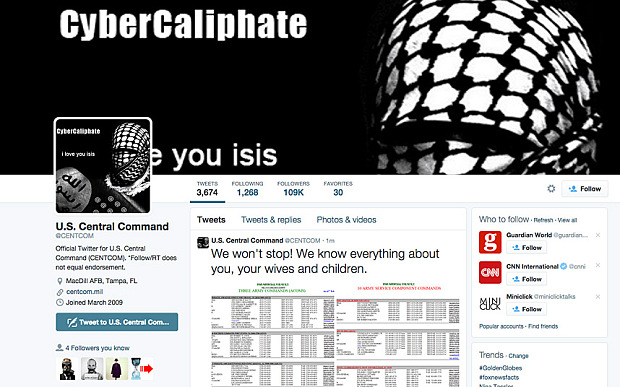 The U.S. military received new threats on Twitter from supporters of the Islamic State. A terrorist group left disturbing messages on US military Twitter. After hacking the American military account, the group of terrorists warned soldiers to watch their back.

These hackers are supporters of the Islamic State militant group that had been targeted by the American raids.

The spokesman of the Pentagon, Army Colonel, Steve Warren, doesn’t consider the hacking a threat but more like a prank of some sort. He admitted that it was inconvenient to have this happen but that no classified or important information was compromised.
The warning posted by the group on the U.S. Central Command Twitter account, told American soldiers to be aware as they are preparing to attack.

“American soldiers, we are coming, watch your back, ISIS.”

They took control of the whole Twitter account and changed the CentCom’s regular logo, with the image of a fighter having his whole face covered and left a general message.

“In the name of Allah, the Most Gracious, the Most Merciful, the CyberCaliphate continues its CyberJihad.”

The hackers went further with warnings saying of having personal information about the wives and children of the military Americans and added the addresses of former U.S. generals. They also claimed having in possession secret information after hacking the phones and computers of the military forces.

U.S. officials admitted that the hacking incident was slightly embarrassing. The platforms had been compromised for 30 minutes and the FBI said that they started an investigation. The spokes man of the White House, Josh Earnest, said that the hacking attack has to be taken as a serious matter but the fact that the terrorists hacked the twitter account is not that significant as there is no storage of important data.

While the terrorist group was hacking the Twitter account, president Barack Obama was holding a speech regarding drastic measures that need to be taken for the cyber security of the country.
Cyber experts from the U.S. security and intelligence said that the name CyberCaliphate doesn’t sound familiar at all and they doubted the group had any technical skills of performing more serious hackings.
One of the former senior officials from the U.S. intelligence stated that the hacking of a Twitter account is as serious as spray painting a subway train.
But Republican Michael McCaul of Texas, considered the incident to be extremely disturbing and advised officials to work on methods to counter attack this sort of assaults which will increase in frequency.