You are here: Home / National News / Baby Born Without Eyeballs in Arizona 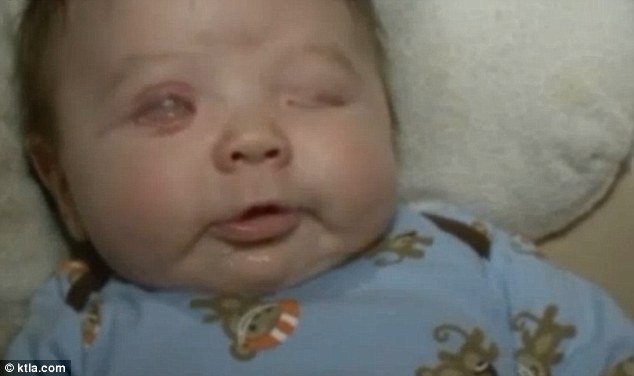 In Arizona a baby was born without eyeballs and his mother Kelly Lopez didn’t have any indication throughout her pregnancy that her baby boy had any health issues, let alone missing eyeballs.

The baby was born three months ago in Mesa, Arizona and a few hours after birth his mother noticed that he wasn’t opening his eyes. At 13 days old, the Richie Lopez had an MRI done and Mrs. Lopez and her family were shocked to find out that the infant had no eyeballs and was in fact born without eyeballs.

The boy’s lids were both closed, which is why it was so hard to notice the lack of eyeballs. The doctors have done numerous tests and have found out that the little boy does have an optic nerve. This means that someday, in the future, he might be able to see, thanks to the ever-developing science.

Right now, little Richie has had surgery to have expanders inserted into his sockets, so that one day, when he is older, he could be fitted with prosthetic eyes. Right now, Richie has only one prosthetic left due to some complications.

Kelly Lopez revealed that she had a normal pregnancy and that there was absolutely no indication that there would be issues with the baby. She continues:

I think we were just in shock. Obviously very upsetting. The first thought through your mind is, how did this even happen and how was it not even caught?

Richie has already been enrolled in programs for blind babies and he’s already wearing baby sunglasses.

This isn’t the first case of a baby born without eyeballs in the U.S. Last year in Denver, Colorado, a baby was born with Anophthalmia, which is the total absence of eye tissue (or the apparent absence of the ocular globe), the Centers for Disease Control describes the disease.

Richie’s mother hopes that one day the doctors will be able to grow an eye for her little boy or even have one transplanted to him. Right now these things are impossible to achieve, but one day science will be advanced enough so that Richie Lopez can see again.