You are here: Home / National News / Christian And Satanist Exhibits at Michigan Capitol 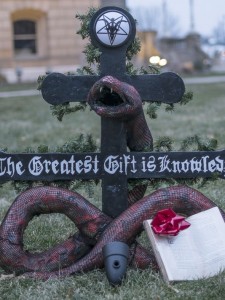 Christmas is about joy, cooperation and sharing good things with others. But this holiday can also give rise to the most curious disputes. One such case is the controversial Christian and Satanist exhibits at Michigan Capitol. The two groups decided the set-up some very powerful presentations of their beliefs on Sunday.

The Detroit branch of the Satanic Temple organized a “Snaketivity Scene” showing a snake offering a book titled “Revolt of the Angels”,  as a blessing. The snake encircles the Satanic cross on the 3-by-3-feet exhibition. According to Capitol regulations, these arrangements cannot be maintained during the night. So each night they are taken down and each day they are put up again.

Satanic Temple spokeswoman Jex Blackmore declared in a video footage for Lansing State Journal that  Satanic Temple followers do not adore Satan but  advance individuality, sympathy and perspectives that vary from Christian and preservationist convictions.

According to Blackmore the during Winter Holidays people can display their belief in numerous diverse ways and having the legislature support one particular perspective or way of celebrating is unsafe since there are so many divers individuals in Michigan.

When hearing about the Satanic Temple’s arrangements, state Sen. Rick Jones, a Grand Ledge Republican decided to put up a Nativity scene on Friday with the traditional characters: Mary, Joseph and baby Jesus. According to the Senator, he wants to speak for the light and not the dark.

Jones also criticized the Satanic Temple’s actions suggesting that they created the “snake set-up” during the Christmas holidays as an act of defiance, as they could have displayed their beliefs any other time of the year. The senator said that Christians should just overlook the actions of the satanic movement and reminded them that Christ is not afraid and neither should they.

On the other hand, Blackmore declared that her group is happy to be a part of what could become a new tradition at the Capitol

Some of the people who saw the displays ironically commented that it is fascinating to see how the First Amendment is enforced by practice. One of them, Martin Diller, a 28-year-old who served in Iraq, and a declared Christian said he and some of his colleagues in the military wanted to see for what they fought for abroad. He stated that it is interesting to see what interpretations Americans give to their Constitutional rights.