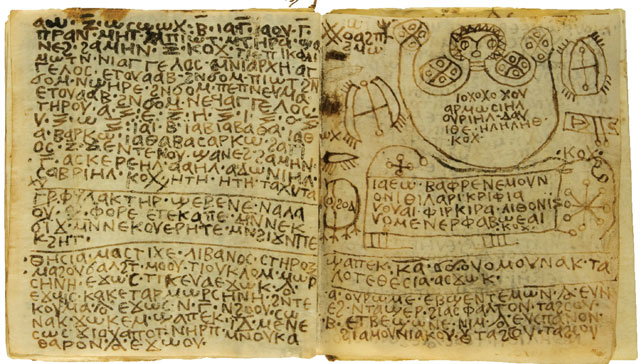 A spell book from Ancient Egypt has been deciphered by experts. The codex contains several spells for different purposes.

Researchers are not quite comfortable with calling the codex a spell book, so they use another name for it, the “Handbook of Ritual Power”. However, the handbook contains twenty seven spells with a large range of action.  The language used in the book is Coptic, an Egyptian dialect and the book itself seems to be about 1,300 years old.

The Handbook is also called a codex, given its layout. It is made of several pages of parchment, bounded together.

“It is a complete 20-page parchment codex, containing the handbook of a ritual practitioner,”

Among the spells that are found throughout the book and which the experts have deciphered, you can find anything from spirit possession and cures for it, to spells on how to bring success in your love or business life.

Experts have dated the ancient spell book to the 7th or 8th century. The certainty of the period is brought by a number of invocations present in the book, which refer to Jesus. During the above mentioned period in time, many Egyptians were Christian, this explaining the Christianity reference.  However, given both the Sethian and Orthodox Christian references and the fact that the Sethians were regarded by church leaders as being heretics and wiped out until the 7th century, the codex is very unique.

Another divine figure illustrated in the book, “Baktiotha” has raised a series of questions among the researchers. According to the translated lines of the book,

“I give thanks to you and I call upon you, the Baktiotha: The great one, who is very trustworthy; the one who is lord over the forty and the nine kinds of serpents.”

Given the mix up between Orthodox and Sethian invocations, the book may be a transitional document, written before the purge of all Sethian invocations from magical texts. Other texts seem to have similar content with the newly decoded handbook, but not so many Sethian features.

It is believed that the spells were first separated from the invocations but then put together into a singular instrument used as a form of ritual power.

The identity of the person who used the codex as well as the origin of the handbook both remain a mystery.