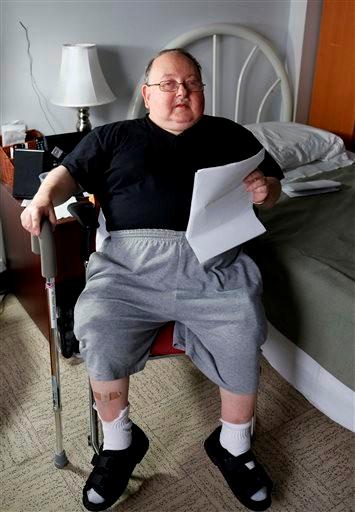 After Superstorm Sandy’s floodwaters, the residents of Belle Harbor Manor were forced to spend four gruesome months in emergency shelters. Their assisted-living center on New York City’s Rockaway Peninsula had been destroyed in the process.

Now that that ordeal is over, the disabled, elderly and poor residents of Belle Harbor Manor have a new storm to sail through. The Federal Emergency Management Agency has asked more than a dozen of them to pay back the aid money they received.

One of these residents is Robert Rosenberg, 61 years old. He received a notice from FEMA requesting that he had been retroactively declared not eligible for the aid checks he received just after the storm’s aftermath. According to the same letter, Rosenberg and a dozen other Belle Harbor Manor residents were declared ineligible because the money had been intended for temporary housing. However, the residents had been moved into state-funded shelters.

Consequently, the Federal Emergency Management Agency informed Rosenberg that he has until November 15th to send in his refund check of $2,486 or to file an appeal.

Rosenberg, who suffers from a spinal disability as well as a multitude of other chronic health problems explains that his income, as the income of other residents, is fixed and that the aid money had been spent on food and clothing.

“We’re on a fixed income. I don’t have that kind of money!”

These letters the FEMA sent out are just part of a broad effort meant to recover millions of dollars paid to Americans in similar distress situations. According to the agency, these aid payments were made although the target households were ineligible, either because of errors, misunderstandings or because of outright fraud.

Back in September, FEMA had already been investigating 4,500 households which, according to their standards, had received improper payments.

850 of those recipients were asked to return a collective of $5.8 million while the other cases underwent review.

Approximately 35 residents of assisted living facilities in Queens, where the Belle Harbor Manor is located, have to collectively return $108,598 in funds meant for temporary housing or destroyed buildings.

Rosenberg recalls asking the FEMA representative urging the residents to apply for assistance if the money had been a loan or if it was intended for specific purposes.

“Everyone asked, ‘Do we have to pay this back later on? Is it a loan?’ They said, ‘No. It’s a gift from Obama. If I wasn’t eligible, then why give it to me in the first place? They knew we were living in an adult home. They knew our shelter was being paid for by the state. It’s not like we lied on the application.”