You are here: Home / National News / Ferguson Police Officer Darren Wilson Not Indicted in the Killing of Michael Brown 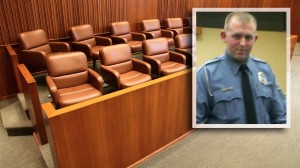 A St. Louis County grand jury declined to indict white police officer Darren Wilson, 28, for the six shots fired into Michael Brown, which ended in the 18 year old’s death. The case had been closely followed after the confrontation on Aug 9th, sparking riots in the St. Louis suburb of Ferguson.

Brown’s family’s lawyer, Benjamin Crump, was informed “The jury was not inclined to indict on any charges”. Missouri Governor Jay Nixon (D) called the National Guard to stand by in case of any proliferation of the riots that rocked the community some 4 months ago. “Our shared hope and expectation is that regardless of the decision, people on all sides show tolerance, mutual respect and restraint,” he said.

As expected, crowds gathered around the police header quarters in Ferguson, awaiting the announcement. The overwhelming majority of the Ferguson is white, and which caused tensions to flair quickly after the shooting in the mostly black community. Brown’s body was left on the pavement after the shooting for more than four hours.

The grand jury convened Aug. 20 to hear the evidence from the 2 week old case. Wilson could have faced life in prison if convicted of the most serious charge by the 12-member group. Other options for indictment ranged from involuntary manslaughter to second-degree murder. A representative of the St. Louis Police Officer Association, Jeff Roorda, met with Wilson and offered that “It’s fair to say that neither he nor his defense team expect an indictment” .