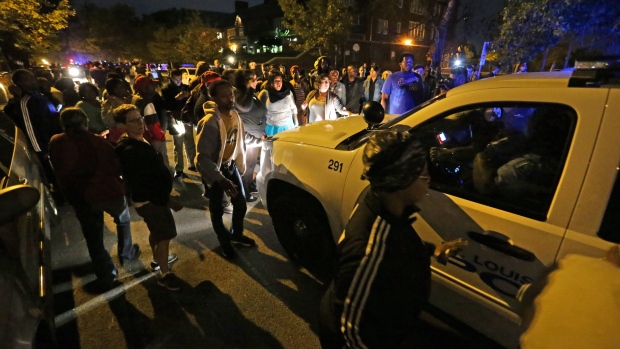 Authorities reported that a white, off-duty police officer fatally shot a black teenager in St. Louis on Wednesday, triggering yet another night of protests near the site where demonstrators have been meeting since the August shooting of Michael Brown. The 18-year-old boy was armed, authorities claim, and fired three shots while attempting to escape arrest. This shooting occurred almost two months to the day since 18-year-old Michael Brown was shot and killed by a white policeman.

An internal investigation will be conducted, Dotson said, after the incidents on Wednesday, where the officer, who was still in city police uniform, fired 17 shots at the teenager.

A crowd of 200 people soon gathered at the scene in the St. Louis neighborhood that is just 11 miles south of Ferguson. A cousin of the suspect, Teyonna Myers, 23, claims that the teenager was unarmed at the time:

“He had a sandwich in his hand, and they thought it was a gun. It’s like Michael Brown all over again,”

As spirits lighted up, about a dozen people began punching and kicking two occupied police vehicles and broke the back window of one of them. Police Chief Dotson said that the department had tried to show a tremendous amount of restraint as none of the protesters were arrested.

Pending the internal investigation, the officer involved in the shooting has been placed on administrative leave.

The Shaw district of St. Louis has a remarkable low crime rate, officers say, and as of September, they had no homicide cases in 2014 and only five aggravated assault cases.

The shooting took place just as a grand jury in Ferguson is scheduled to decide on whether to bring criminal charges against the police officer involved in the Michael Brown shooting, Darren Wilson. Their answer is expected next month. After the passionate (and often violent) protests that followed Michael’s shooting, authorities are now drawing up contingency plans and discussing possible containment options with other police departments around the country. They fear that fresh riots may erupt at any moment if Wilson is not indicted, especially since this new shooting could reignite tensions among protesters.