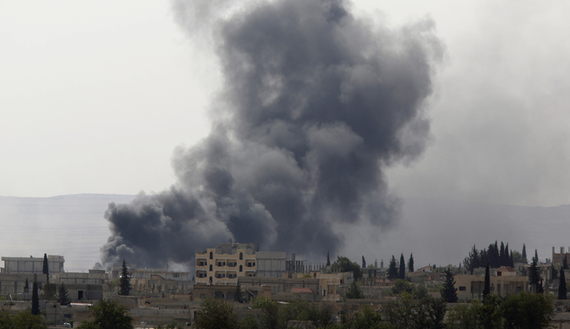 Kurdish forces in Syria fought valiantly on Tuesday as Islamic State militants continued their siege on Kobani, the city near the Turkish border that has been under attack for the previous weeks. Recep Tayyip Erdogan, Turkey’s president, announced that the Syrian town was about to fall although the United States and their allies continued airstrikes on the extremists.

Mr. Erdogan explained that aerial attacks alone may not represent an efficient approach to stopping the Sunni militants and asked the U.S.-led coalition for support. However, in his plea for help, the Turkish President stroke a delicate cord, as Washington has asked Turkey to also involve itself in the joint action against the Islamic State. At the same time, Erdogan wishes that the U.S. focuses more on ousting Bashar al-Assad, Syria’s president.

“There has to be cooperation with those who are fighting on the ground,”

However, before any action is taken against al-Assad, Syrian refugees watching desperately from Turkish hilltops on Tuesday urge that Kurdish ground troops receive help. Syrian and Turkish Kurds watch the fighting on the streets of Kobani helplessly and believe that Mr. Erdogan may be a greater threat than the Islamic State because of his long history of Tensions with the Kurdish population.

These complications create challenging circumstances that the U.S.-led coalition needs to navigate around in their effort to battle ISIS without involving itself deeper into the Syrian conflict.

Immediately after Mr. Erdogan spoke, an airstrike hit just southwest of Kobani. According to witnesses, the strike was targeting an Islamic State tank that had been firing at the city for the past couple of days. In less than an hour after the first strike, several others followed in the same areas.

The coalition also carried out airstrikes that hit the ISIS militants overnight and Tuesday morning on the outskirts of Kobani. Barwar Mohammad Ali, a coordinator with the Kurdish Y.P.G. force, said.

“It is the first time that people have the impression that the airstrikes are effective. But they need more.”

The airstrikes were confirmed by the U.S. military, which stated that one hit just south of Kobani and destroyed three armored vehicles, the other had hit antiaircraft artillery and the two others had damaged a tank and destroyed an ISIS unit.

Currently, Kobani is cut off from three sides by well-armed Islamic State fighters. In the north, refugees and fighters face the border with Turkey, where Turkish authorities have refused to allow supplies and weapons to be sent if they don’t meet a set of politically impossible demands. Kurdish men watching the fighting from Turkey’s hilltops fear that the city’s fall is growing closer.