You are here: Home / National News / Infomercials used by The University of Akron to Encourage Student Graduation 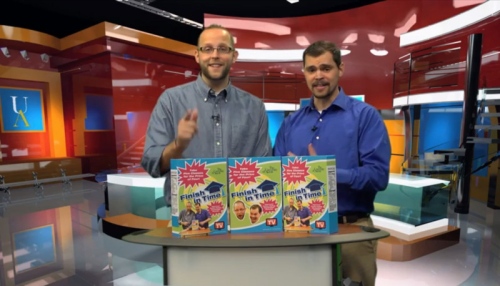 The University of Akron, in northeast Ohio, is going for a different approach that might encourage students to graduate on time. It has decided to use amusing, infomercial-style videos to push them towards a timely graduation. The Finish in Time (also known as F.I.T.) effort of the Akron University hopes to help students take at least 15 credit hours per semester.

For this purpose, the University, is mailing videos of co-hosts dancing bizarrely and attempting side effects like “a craving for an extremely large burrito” or “more cash in your pocket”. Other resources talk about the benefits of graduating in time and with less college debt. By doing this, the university hopes to connect with its students.

“It’s a serious topic, but we wanted to do something to get the attention of the audience we were going to. We went for cheeky, not preachy.” – Wayne Hill, associate vice president of marketing

In recent years, the school’s graduation rates have been 40 percent or below. This alarming news prompted a different approach. According to the Akron Beacon Journal, the school will benefit if students respond because state funding is dependent on six-year graduation rates. Until now, there have been two cheesy videos that look like low-budget infomercials.

One of them is a 90-second video with Chris Stimler and William “Willy” Kollman. The two banter as the “F.I.T. guys” and talk about graduating on time while a huge burrito appears in front of them. They stay behind F.I.T. boxes of cereals labeled with “As Seen on TV”. The message for the audience is:

“Join the masses and schedule your classes today.”

One of the hosts, Chris Stimler is assistant director of admissions, and William Kollman is the associate director of alumni relations. Chelsi King, the senior and president of the Undergraduate Student Government is one of the first to praise the F.I.T. campaign.

“I’m ecstatic that they are pushing it.” – Chelsi King

The campaign has already wielded results. It seems that many students were encouraged to “act now”, as the commercial states. Statistics show a 28 percent increase in first-time, full-time freshmen that have obtained their 15 credit hours in the fall, as compared to last year.

The Complete College America, an Indianapolis non-profit, has also released a survey which shows that 52% of full-time students in the country are taking fewer than 15 hours (a standard that would result in graduation in four years).

“The University of Akron is on track to be a national leader w hen it comes to increasing the number of students taking 15-plus credits a semester. By the progress you’re seeing in your first-time freshmen, you are taking big steps to change culture. Most of your freshmen are on track to graduate on time. That’s a big deal.” – Blake Johnson, spokesman for Complete College America