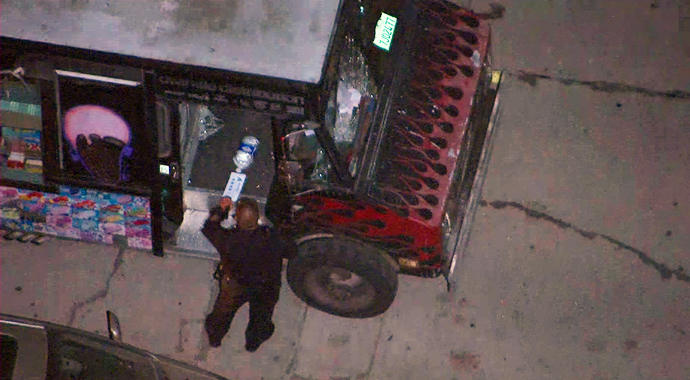 A tragic accident unfolded on Wednesday evening in south Los Angeles as a 7 year old boy was killed after being hit by an ice cream truck. His mother and residents, who has witnessed the events attacked the truck’s driver.

According to South Los Angeles police, the boy was riding his bicycle alongside the ice cream truck when it slipped and landed under the truck’s wheels. Officer Nuria Venegas, Los Angeles Police Department Spokeswoman said in a statement that the events occurred shortly after 7 PM on Wednesday. The boy was immediately transported to the Harbor-UCLA Medical Center, where he sadly succumbed to his injuries. She added that the collision had been an accident.

“He was riding an electronic bike right next to the ice cream truck, apparently he may have slipped, got caught up underneath the truck, the rear wheels rolled over him.”

After seeing the accident, an angry mob began throwing bricks at the driver and the situation escalated to a point where one of the residents threatened him with a knife. Despite the attack, the driver managed to flee to safety, suffering only bruises. The Emergency Medical Team took him to the hospital as a precautionary measure.

The boy was riding his motorized bicycle home with his older brother when the accident occurred.

“I don’t know what I’m going to tell my brother. His son is dead.”

Harris added, also admitting that William’s mother may have been among the residents who attacked the ice cream truck driver soon after the accident. He added that she had every right to do so.

Police, on the other hand, said that this has been nothing more than a tragic accident and as such, they did not arrest the truck driver.

“I walked outside. He was lying on the ground bleeding, so I just tried to comfort the family ’cause they was screaming. It’s really sad because I have a kid that is younger than he is.”

The identities of both the boy and the driver have not been made public, and the police is still unclear as to who attacked the ice cream truck driver. Police has announced that the driver will not be charged.