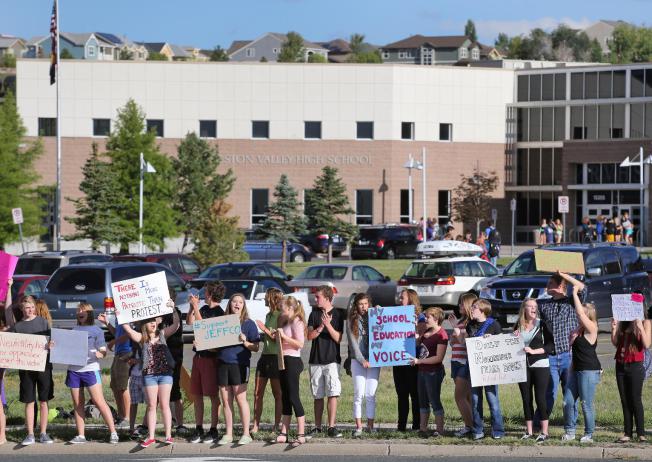 Hundreds of Denver high-school students stormed out of class on Tuesday in protest of a student board’s proposal to focus history education on topics that would encourage respect for authority, patriotism and citizenship.

According to the Denver Post, tensions have been building up for some time, mainly because of two issues: the proposed curriculum and the evaluation-based system for rewarding raises to educators. However, it was the new curriculum proposal that caused an unprecedented escalation. It would call for the promotion of topics that would highlight the “positive aspects” of the United States as well as its heritage, while avoiding material that could encourage or condone “civil disorder”, “social strife” or “disregard of the law”.

Two high schools closed on Friday in response to the proposed curriculum, as over 50 teachers either took personal days or called in sick. On the following Monday, students from six high schools began protests.

According to participants, their demonstration had been organized by word of mouth as well as social media, and involved students waving American flags and carrying signs that read “There is nothing more patriotic than protest.”

Countless students expressed their disapproval of the board’s proposal claiming that:

“I don’t think my education should be censored. We should be able to know what happened in our past,”

Last year, a conservative majority was apparently elected to the school board, which hired a new superintendent after clashes with the previous one. Julie Williams, part of the board’s conservative majority, is believed to have proposed the changes in the history curriculum.

The proposal hasn’t been voted on yet.