You are here: Home / National News / Power Sharing Deal to be Signed By Afghanistan Political Rivals 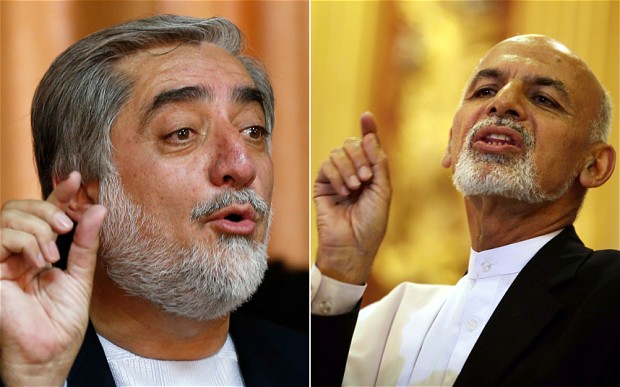 The two Afghanistan presidential candidates have agreed to sign a power-sharing agreement following the months of quarrels over the outcome of June’s elections.

According to a spokesman for Hamid Karzai, current Afghanistan president, Ashraf Ghani Ahmadzai and Abdullah Abdullah had come to an agreement and would sign a deal aimed at creating a national unity government. The signing is scheduled on Sunday at noon, local time. It will coincide with the announcement of the final election results, accused to have been stained by fraud on both sides.

An audit and recount of the eight million cast votes has been monitored by the United Nations.

This agreement between the two candidates was brokered by U.S. Secretary of State, John Kerry, during his visit to Afghanistan in July. Kerry the returned to Kabul in August, where he spent hours on end with both candidates in phone calls aimed at sealing the deal.

The brokered deal will have the winner of the elections, most likely Ghani, become president. Significant responsibilities, however, will be granted to either Abdullah or a representative designated by the presidential candidate, to serve as an equivalent of a prime minister. Additionally, other terms of the deal will have the new president and his prime-minister-equivalent decide on a near-equal number of government positions.

One of the final sticking points was represented by the announcement of the results. Abdullah claimed that the elections had been so tainted by fraud that no results should be made public. It isn’t clear how this particular matter was solved, however, Abdullah’s campaign officials told reporters that the deal would surely be signed on Sunday.

Abdullah is convinced that he won the first round of the elections by a margin of over 50 percent back in April. However, the official results proved that he had only won 45 percent of the vote, in a presidential field of 10, which wasn’t enough for an outright victory. Similarly, he is also convinced of having defeated Ghani during the June runoff. However, official totals have Ghani with around 55 percent of the vote.

When hearing this, Abdullah threatened to create a parallel government together with his northern supporters and react violently on Ghani’s victory.

Ghani on the other hand, agreed that the ethnic politics in Afghanistan requires some sort of power sharing arrangement instead of a winner-takes-all situation for ensuring the peace.

This power sharing agreement would also allow the new Afghan president to approve an official bilateral security deal, permitting over 10,000 American troops to remain stationed in the country after combat missions end this year.