On Monday, the Hong Kong Police used pepper spray to disperse the sea of pro-democracy activists. The activists stormed a security check-point during an event where a senior Chinese official was talking about Beijing’s decision to not grant full democracy to the former British colony. 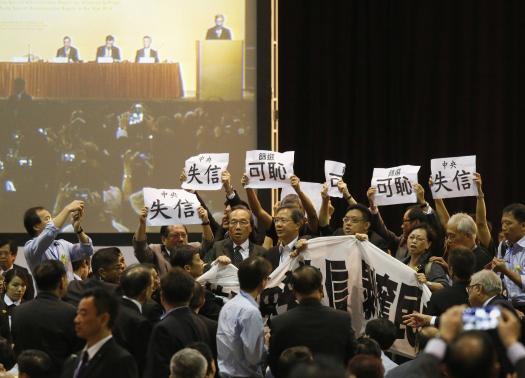 There was a struggle at the entrance to the center, where deputy secretary general of China’s National People’s Congress (NPC) Stand committee, Li Fei, was holding the speech. The Democratic camp, dressed in black and wearing yellow ribbons,  was escorted out of the auditorium while they were changing and holding up signs that read “shameful”. Li was heckled as pro-democracy activists were shouting slogans and attempting to interrupt him. Li Hei announced on Sunday, to rule out fully democratic election by 2017, for the city’s next leader.

What the activists want is universal suffrage. However, Communist Party rulers in Beijing believe that any candidate for the territory’s chief executive must first be approved by a nominating panel (the panel is full of pro-Beijing loyalists). Things are unlikely to be resolved, especially considering that Hong Kong returned to Chinese rule in 1997. Since then, the city has not enjoyed very many freedoms tolerated on the mainland (due to a policy called “one country, two systems”).

In other news, activists from a movement called Occupy Central, threaten to blockade Hong Kong’s financial district if Beijing refuses to offer full democracy. They are now preparing the stage for a series of disruptive protests next week.

Alex Chow, who is the leader of the Hong Kong Federation of Students, was escorted out during the protest. It seems that student activists want to boycott classes in mid-September. Students from 11 schools have already confirmed their participation.

Roughly 100 activists have gathered for Li’s speech. Some of them were holding up signs, while the others were carrying British colonial flags. A group of Beijing loyalists was also waving China’s flag.

The NPC Standing Committee has also endorsed a framework that would ensure that only two or three candidates will be running in the 2017 leadership vote. Considering that they first require a majority backing from the nominating committee, it can be assumed that it will not be a leader that pro-Democracy activists want.

“This decision by the NPC to limit the type and number of candidates for Hong Kong’s election is a major setback for the progress of Hong Kong’s democracy, and we express regret at this decision.” – Democratic Progressive Party