Los Angeles Dodgers left-hander Hyun-Jin Ryu threw seven scoreless innings while allowing just two hits in the Dodgers’ 7-0 win at Angel Stadium Thursday night. The Dodgers succeeded in moving to a season-best 16 games over 500 and in improving the majors’ best road record to 36-23.

“I’m not sure, I just threw really good,” Ryu said through an interpret. “Obviously last year it was a good game for me. I think I just had that feeling and tried to duplicate the same outcome.” 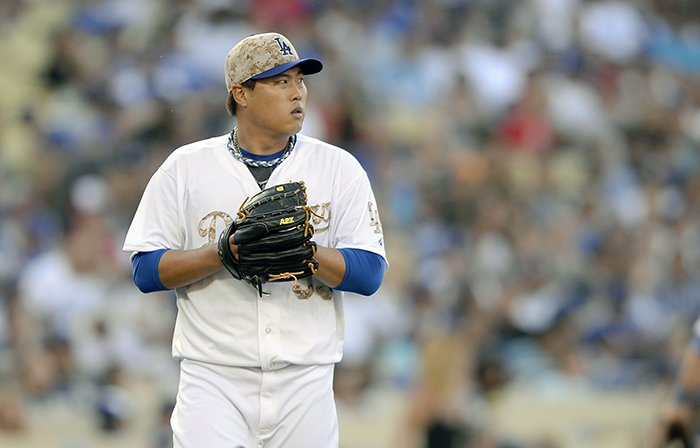 Moreover Hanley Ramirez also had a two-run single and therefore the Dodgers wrapped up the Freeway Series with their third straight win.

The Angels (67-47) managed just two runs on eight hits in the final 24 innings of the series, falling three games behind Oakland atop the AL West standings. Adrian Gonzalez added a late two-run single as the NL-leading Dodgers (66-50) executed their Southern California neighbors in Anaheim, allowing one run in two games to win the Freeway Series for the first time since 2006.

“It’s just great to get wins against good teams like that,” said Matt Kemp, who drove in a run and scored another. “It builds our confidence up to come in here and get two games in the way we did.”

Ryu (13-5) was great in his fourth victory in five starts, striking out four and allowing just two runners to reach third base. The Korean threw a shutout last year in his only previous game against the Angels. “It just felt really good to do it again,” Ryu said through a translator. “Last year, I had that really symbolic game for me. I just tried to duplicate the outcome. It’s a great thing to be on a winning streak and to take the series here.”

But on Thursday night, Ryu was like a tiger from the very beginning, not allowing a hit until third baseman David Freese doubled with one out in the fifth. The Angels managed to hit the ball out of the infield just five times in Ryu’s seven innings, Ryu getting 11 groundball outs, four strikeouts and one infield popup.

The Angels came to life for a short while, when Albert Pujols’ sixth-inning double ended a 0-for-20 combined skid by Trout, Pujols and Josh Hamilton. But Yasiel Puig sprinted and leaped to catch Hamilton’s inning-ending drive at the warning track.