You are here: Home / Sports / Prosecutors Seek to Arrest Adrian Peterson on Drug Use Charges 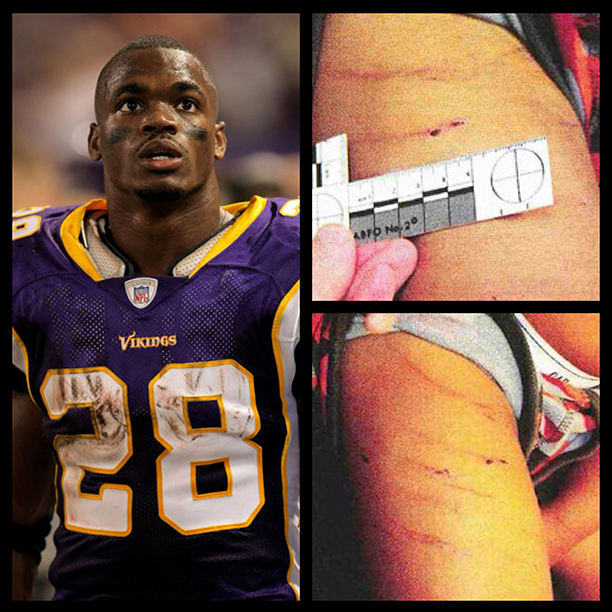 A Texas prosecutor is now seeking to arrest the Minnesota Vikings star running back Adrian Peterson after he submitted to a drug test on Wednesday and admitted to having smoked “a little weed”, court records show.

This drug test was included in the conditions of his $15,000 bond after the Minnesota Vikings star was accused of child abuse for having disciplined his son. On Wednesday, Peterson had to submit to a urinalysis and during the test, told an employee of his weed smoking habit. After learning about this confession, the district attorney from the Montgomery County asked the judge presiding over Peterson’s case to set aside his $15,000 bond and take the Minnesota player into custody again.

“In light of this statement, and the fact that it was made during the urinalysis testing process, and the term ‘weed’ is a common slang term for marijuana, the state argues that the defendant has smoked marijuana while free on bond for the current offense,”

Peterson’s case is scheduled to go to trial on December 1st , however, that date could be modified if the Texas judge must recuse himself for calling attorneys “media whores”. Until then, Peterson is barred from having any contact with the son involved in the case. He still is allowed to have contact with his other children.

“I don’t think the judge ever asked for a plea. As we said yesterday, if the judge asks, Peterson will plead not guilty.”

“It’s come to my attention that on October 2 you referred to Mr. Hardin as a whore […] specifically a media whore. And you also called me a whore or a media whore.”

Regardless of what Ligon and Chase work out, Peterson faces up to two years in jail. According to Texas law, injuries to a child consisting of bodily or mental injuries which occurred intentionally, recklessly or with criminal negligence, are punishable by up to two years in prison.

TMZ published pictures where Peterson’s son’s leg is covered in marks, many of which seem to have broken the skin. Hardin insists that his client never meant to hurt his boy and that he simply applied what he had experienced as a child. Peterson himself described his actions, claiming that he is:

“not a perfect parent, but I am, without a doubt, not a child abuser.”