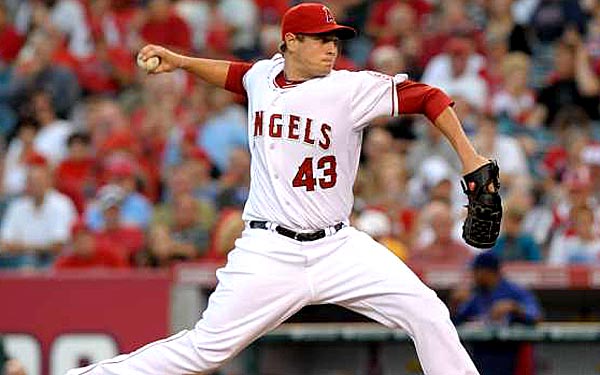 Angels pitcher Garrett Richards, who suffered a “significant” left knee injury while covering first base, was scheduled to fly back to Los Angeles on Thursday in order to be examined by team doctors for what manager Mike Scioscia called a “significant injury” to his left patellar tendon.

“Winning the game, obviously, it’s always important, but it’s secondary to what happened,” Angels manager Mike Scioscia said after the 8-3 win over the Boston Red Sox on Wednesday night. “This is a tough night for us. We’ll just see where Garrett is. Obviously, it’s a significant injury.”

Wednesday night, on the field, medical personnel attended to Garrett Richards, who was lying on his back. He was in so much pain that first baseman Albert Pujols, on one knee, held the pitcher’s hand to comfort him.

Richards spent eight minutes on the ground before being wheeled out on a stretcher. His 2014 season appears finished, as the surgery he supposedly requires takes up to six months to heal.

“I had a chance to talk to him,” Angels pitcher Jered Weaver said. “He just wanted to know what the story was. He wasn’t feeling too much pain when he was on the table. When the doctor came in and told him that he might have done something to his patellar tendon and there might be surgery involved, he kind of lost it.”

Richards was injured in the second inning of the Angels’ 8-3 win over the Boston Red Sox on Wednesday night. Boston had runners on first and second when Red Sox third baseman Brock Holt hit a grounder to Angels first baseman Albert Pujols. Richards went to cover first base, but never made it, falling to the ground and holding his left knee. Richards was taken off the field in a stretcher after being seen by trainers.

“When I saw him go down, I got sick to my stomach,” said center fielder Mike Trout, Richards’ roommate since the minor leagues. “It didn’t look good. He was in tears. I feel terrible. When I talked to him (in the clubhouse), he was devastated.”