On Thursday, a Malaysia Airlines plane carrying the bodies of 20 victims that lost their lives during the plane crash that took place in eastern Ukraine in July, landed in Kuala Lumpur.

A day of mourning will be held in the honor of the 20 victims of the plane crash.

The specially chartered aircraft carrying the bodies took off from Amsterdam Schiphol Airport and landed in Kuala Lumpur at 10:00 local time. 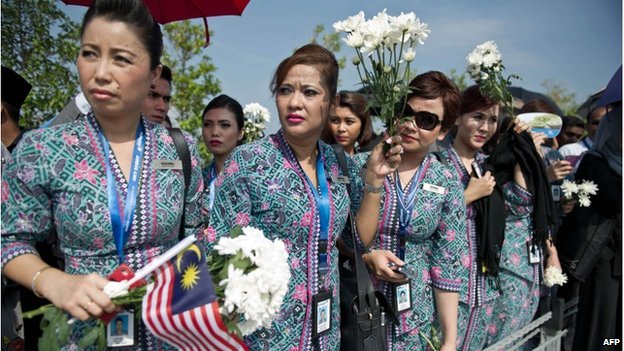 Across the country, national flags will fly at half-mast. A minute of silence is also planned.

The victims who lost their lives in eastern Ukraine were flying on an aircraft that was most likely shot down by a missile fired by pro-Russian rebels. The separatists have however denied the claims.

As the Malaysian Airlines Boeing 777 aircraft crashed, all 298 people on board the MH17 flight lost their lives on 17 July.

The coffins were escorted by a small contingent of Malaysian soldiers that approached the aircraft as the coffins were being unloaded. National flags draped all 20 of the coffins that came with the ashes of the 20 passengers (the bodies had been cremated in the Netherlands).

According to the New Straits Times, even Malaysian public transportation, the rail system and the Kuala Lumpur monorail will be coming to a complete standstill as the entire country will take part in the two minutes of silence that have been scheduled to honor the victims of the crash.

The Star newspapers as well as the New Straits Times have darkened their mastheads on their websites to show respect for the victims that have come home.

After arriving home, the bodies of the victims will be given to their families and relatives.

The current situation is the first time in history when Malaysia will have a national day of mourning in honor of civilian victims. Before, such days had been granted only to heads of government or royal family members.

On board flight MH17, there were a total of 43 Malaysian nationals. During the international investigation that followed the crash of the aircraft, only 28 Malaysian victims have been identified thus far.

Around 200 coffins have already reached the Netherlands with victims from the crash. However, the investigation has been seriously hampered because of the continued fighting between the Ukrainian government and the pro-Russian separatists.

In the future, more bodies will be flown in as soon as they are properly identified.