On Saturday, an 18 year-old unarmed African-American Missouri teenager was fatally shot by a police officer. Today, President Barack Obama expressed his sincere regrets and said that this death has caused strong passions to arise and that this is precisely why reflection and understanding should be on everyone’s mind.
According to President Obama, resources will continue to be redirected to the case if necessary. The shooting will be investigated by Attorney General Eric Holder. 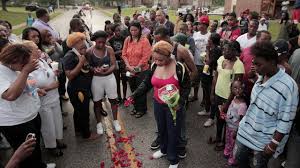 After Michael Brown’s death, local residents began to protest over the way that the teenager was shot, and the protests went so far that hours-long standoffs occurred between officers in full riot gear and residents.
Tear gas canisters were used, as well as rubber bullets, so that protesters could be removed from the streets. Such actions were of course received with extreme disapproval. Residents explained that such a situation, in which people would be shot with tear gas in their own front yards, was absolutely unacceptable.
On Tuesday, protesters came to the prosecutor’s office in St. Louis County where they demanded that justice be made. Unrest has come over the town of Ferguson, Missouri, and it’s just beginning.
A civil rights investigation has been launched on Monday by the FBI, as the question of race and the unrequired use of force in such a case came back to the forefront of nationwide discussions. It seems that racial animosity is once again in the spotlight, as it was back in 2012 when a 17 year-old African American teenager was shot.
Benjamin Crump will be representing Brown’s family (Crump also represented Martin’s family) and as soon as the appeared, Crump noted that the death of Michael Brown was yet another death of a person of color that made no sense.
On Tuesday, the name of the Police officer that fatally shot Michael should have been released. However, because of threats that have been pouring in against Ferguson police officers, the Police Department has decided against making the name public, Timothy Zoll, spokesman for the FPD explained.
While the officer in question has been placed on administrative leave, Zoll noted that there was not timeframe in which residents should expect that the name will be made public.
On Sunday and Monday, the Ferguson site and e-mail system were hit by cyber attacks, and a group claiming to be affiliated to the hacking collective Anonymous claimed to possess the identity of the police officer who shot Michael.