You are here: Home / National News / UN War Crimes Archive from WWII to be Made Public 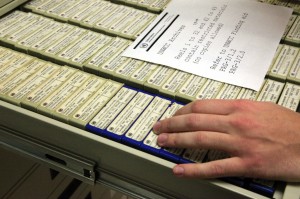 The Holocaust Museum has acquired copies of UN war crimes archive from War World II and they will give the public free access to the information. This means that the world will know pretty much every name that staffed death camps and the thousands of criminals of WWII war crimes.

The Holocaust Memorial Museum in Washington, U.S. has managed to obtain a full copy of the U.N. War Crimes Commission archive that has been kept under locked key by the United Nations for 70 years. Today, the museum has announced that it has digitized the archive and it is available to visitors in the research room for free.

This is a huge milestone, as until now even researched at the United Nations had to petition for access to this archive through their governments. Historians, investigators and the public were kept out, until now. This happened because many of the people whose name is in the archives were never held accountable.

The archive contains about half a million digitized microfilm images with more than 10,000 case files on people that are identified as criminals of war. The information is available in multiple languages. Meeting minutes, trial transcripts, lists of personnel at concentration camps (including Auschwitz) are all there.

All this information and evidence was submitted by 17 member nations to so that the criminals of war would be arrested, but the commission of war crimes was shut down in 1948.

These archives also contain detailed accusations against Adolf Hitler and other Nazi leaders. The former German leader is cited for:

murder and mass murder in concentration camps, looting and confiscation of property and torture of civilians among many other offenses.

This archive was more or less forgotten until 1987 when historians and researchers were granted limited access. The names of the people on the list were kept off limits. In 1987 officials from Israel claimed they had evidence that Hitler had ordered the deaths of more than 10,000 Jewish women and children in Latvian village. This was the first evidence that showed Hitler’s direct participation in the exterminations of the Jews.

What are your thoughts on this great news? Will you visit the Holocaust Museum in Washington to take a look at the archives there? Are you looking for a name in particular? Share your thoughts with us in the comment section below. We love hearing from our readers!