You are here: Home / Sports / James LeBron Sent Cupcakes to all His Neighbours 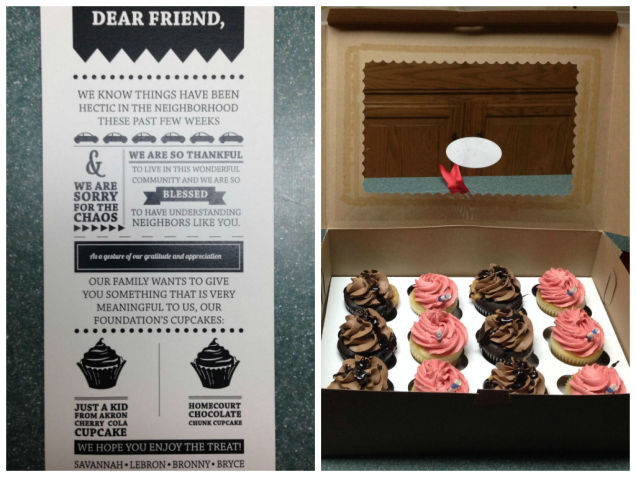 Now he’s back in Ohio, LeBron James wants to make sure he’s as involved as his nexts would expect him to be. So he sent cupcakes to all his neighbours.

James, who is currently in China, bought the property back in 2003 and built a 30,000-square-foot mansion on the land. The decision he had to take involved whether he would come back to Ohio or stay with the Miami Heat.

His announcement regarding his return to the Cleveland Cavaliers caused quite a fuss in Bath Township, Ohio. Curious folks along with the media wanted to take a glimpse of the superstar’s house. This caused quite a mess in the neighborhood. The visitor’s presence led to increased traffic and police surveillance in the area.

As an apology for that distraction, the James family recently sent neighbors a box of cupcakes to say sorry. The card read: “Dear Friend, We know things have been hectic in the neighborhood these past few weeks. We are so thankful to live in this wonderful community and we are so blessed to have understanding neighbors like you. As a gesture of our gratitude and appreciation, our family wants to give you something that is meaningful to us, our foundation’s cupcakes. We hope you enjoy the treat!”

Each package contained one dozen cupcakes and they were delivered by employees form Baker Boulevard Decadent Desserts. As far as the types of flavors are concerned, Homecourt Chocolate Chunk and Just A Kid from Akron Cherry Cola were LeBron’s decision for the occasion. These particular types of cupcakes were especially developed for James’ foundation, and all the money that results from their sale goes to charity.

In the meantime James began a 5-day tour in China on Monday. He was greeted by famous Chinese pianist Lang Lang at the Wukesong Sports Center. James offered Lang a pair of basketball shoes and Lang gave James a copy of his album and also a FIFA World Cup CD in exchange.

James, 29, first visited Beijing in 2008, with he American Dream Team during the Summer Olympic Games. This time he stood in front of hundreds of basketball fans and acknowledged the fact that interest in basketball has increased considerably during the past years. “Every time I come here, the game of basketball grows more and more.”

His visit is sponsored by Nike, and also includes other stop points, such as Guangzhou and Hong Kong. He’ll also make two stops in Taiwan, in Kaohsiung and Taipei.