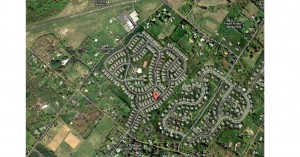 Sunday night saw firefighters evacuate numerous Pennsylvania homes, on account of a mysterious gas, which has yet to be identified as of the time this article was written. The authorities were alerted after the meters installed in the area detected a strong, yet mysterious odor. According to spokespersons of the local fire department, some 150 homes in a Pennsylvanian community were evacuated as an effect of the incident. The same department representatives explained that they were first alerted by a community member in Skippack Township. A person living in a home on block 4200 of Gorski lane complained of the strong scent early on Sunday evening, around 5:45 pm. Skippack Township is situated some 25 miles to the northwest of Philadelphia.

The fire fighters then intervened and, with the help of their detection meters, identified that a volatile gas was being produced by the mass of organic compound in the basement sump pumps of the community. The chief of the local fire department said: “as soon as I walked into the house with my meter, my meter went into alarm, telling me that they had high readings. Because they had that we started checking each attached house and kept getting readings so we kept going. Basically, in this entire development, most of the houses have some sort of reading in it”, added Haydn Marriott, the fire department chief.

Several homes were identified as the possible sources of this volatile gas. However, the fire fighters were unable to identify the gas right there and then. Sources provided by the Environmental Protection Agency say volatile organic compounds include a very ample range of gaseous substances. They can be produced by many different products, including (but not limited to) paint, lacquer, diluting agents, pesticides, permanent markers, as well as cleaning supplies. Such substances can seep into the ground after storage tank spills or leaks, or they can be brought in by runoff from adjoining roads and parking lots, after a storm or normal rainfall. These compounds are usually liquid and become volatile after they evaporate, says data from the U.S. Geological Survey.

After the final night of the weekend saw firefighters evacuate numerous Pennsylvania homes, on Monday the Montgomery County Department of Public Safety issued a statement regarding the incident. The DPS said they were actively working on identifying the substance. Many of the evacuated residents waited outside their own homes, as the local firefighters searched their buildings, but, in spite of their hopes to return home, many evacuation orders still stood on Monday morning. The people evacuated from their homes by the authorities were provided shelter at a local elementary school, where the Red Cross set up a temporary shelter.

As a result of the odor, and subsequent detection of the volatile substance, a United flight had to alter its course.