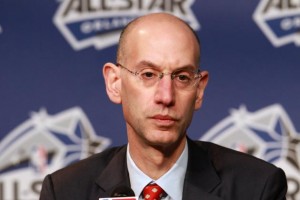 In a statement made Tuesday evening in Las Vegas, NBA Commissioner Adam Silver expressed his hopes that the sale of the Los Angeles Clippers, whose price tag is an impressive $2 billion, will go through as planned. According to plan, the sale of the team should be completed before the commencement of the following season. However, Silver added, at the moment it’s impossible to make any promises that the sale will actually happen, because it’s being held back in court. On Tuesday night, Adam Silver met up with the NBA Board of Governors. It will be difficult to oust Donald Sterling, the Clippers owner, says NBA Commissioner Silver, because he’s the one behind the legal hold-up of the sale.

Silver explained that “it’s very difficult to say anything with certainty in a situation like this. I can say with certainty we are doing everything in our power to move Donald out as an owner in the NBA.” At the moment, Sterling’s wife, Shelly, is attempting to sell the NBA team to Steve Ballmer, the CEO of Microsoft. Previously, Donald Sterling had been eliminated from the NBA on account of having made racist remarks. He is now challenging the $2 billion deal in court.

The initial deal saw Ballmer and Shelly Sterling reach an agreement: he would by the team if he got the board’s vote of approval by a certain date. Of course, since a lawsuit has emerged in the meantime, Ballmer’s deadline has long since expired. It can, however, be extended, and, according to Commissioner Silver, the NBA is waiting for the lawsuit to unfurl. He explained: “we’re in essence on hold, since that sale is being challenged by her husband as to whether she has the right. If the court finds in her favor, the sale will move forward. If not, we will move forward with our own proceedings.”

Initially, the NBA had decided to ban Donald Sterling from NBA ownership for life. The league had devised a plan, according to which Sterling’s ownership of the team would be terminated. In the meantime, though, Shelly Sterling came forward as a witness and stated she and Silver had discussed the possibility of reducing her husband’s ban, in order to aid with the team’s sale. Then, she agreed to selling the team to Ballmer.

Silver confirmed that he and Shelly Sterling had discussed the matter. He said: “Shelly and I had several conversations over the course of the last few months in which Shelly proposed all kinds of things to me. and frankly it’s never been quite clear if she’s able to speak for Donald.” The NBA Commissioner also added that although he had asked for a written proposal from Donald Sterling, he never received one.