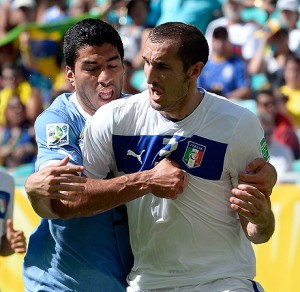 Last night’s Italy-Uruguay clash in Group G of the 2014 FIFA World Cup also brought on an incident that has less to do with sportsmanship and far more to do with scandal: Luis Suarez, a forward for FC Liverpool, allegedly bit Italian defender Giorgio Chiellini. There is a considerable amount of controversy surrounding the event, which seemingly took place with only 12 minutes before the final whistle of the game, with the scoreboard frozen at a pristine nil-to-nil.

Mexican referee Marco Rodriguez, who was present at the game, failed to make note and sanction the incident. However, an official statement posted by FIFA representatives on the organization’s website says that there will be investigations into the event. The 27 year-old Uruguayan forward risks a maximum ban of two years for his alleged actions, which may have occurred during last night’s game in Natal, Brazil. The Italian’s claims were substantiated on Wednesday, when ITV released a series of images from a different angle than the ones broadcast during the game. In the shots, Chiellini can be clearly seen reacting only after he has made contact with Luis Suarez. The two clash, have a brief tussle, then fall to the ground in the court’s penalty area. But while in the initially aired images, the biting was arguable, in these ones, it’s rather hard to argue against.

This is not to say that Luis Suarez doesn’t have his supporters. For one thing, the captain of Uruguay’s national soccer team, Diego Lugano, spoke out against Chiellini. He said he re-watched the TV footage and saw nothing wrong, aside for the struggle on the pitch, followed by a photograph of Chiellini showing an old scar. “You have to be stupid to imagine that scar is recent, very stupid,” Lugano added. Lugano also criticized Chiellini’s apparent indiscretion: “If Chiellini spoke about that after the match then he broke every dressing room code and I never thought an Italian would be such a snitch off the pitch. It would have been more manly to accept defeat and correct mistakes made.”

The mass media in Uruguay also predictably took Suarez’s side and claimed that the images shown on TV, as well as the photos printed by the press are “inconclusive”. According to Uruguayan newspaper El Observador, the mark on Chiellini’s shoulder could just as well be a mole. “That’s the lines along which Uruguay will be mounting their defence. There’s no proof Luis definitely bit him.” The two soccer players had a similar run-in last year, during the play-off for the third place in the hierarchy of the Confederations Cup, which also took place in Brazil.