You are here: Home / National News / Median net worth of grads under 40 with Student debt deeper than nongrads

According to a new research the financial efforts of those under 40 with student-loan debt extend far beyond the college loans themselves. 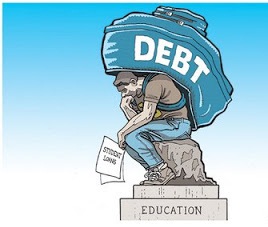 The report was issued by Pew Research Center  on Wednesday.

This is because people with student loans often have other types of debt as well like car loans or credit-card borrowing and mortgages, which is a heavy encumbrance on their overall financial well-being.

Young people with student loans have a median total indebtedness of $137,010.

“We’re not saying college was a bust. We’re simply saying that young adults with student loan debt are far behind in building their nest eggs,” said Richard Fry, the author of the report.

That is almost twice the $73,250 debt level for those with no college debt.

Median signifies the point in a range at which half the measured values are higher and half are lower.

The median income for a household headed by a graduate under 40 is $57,941 or nearly twice the $32,528 level for those without bachelor’s degrees.

“Young adults with student loan debt are starting out behind in building their nest eggs,” said Richard Fry, the lead author of the new study. “College grads with student loans are benefiting from higher incomes because of their degrees, but about four in 10 borrowers are weighed down with a substantial amount of debt that extends beyond student loan debt.”

However the report does not conclude why college graduates with student loans finish up tunneling deeper into debt, pointing to the fact that one with greater incomes are able to take on more debt.