You are here: Home / National News / GOP’s Love Has Opening for Seat in Congress with Matheson Departure 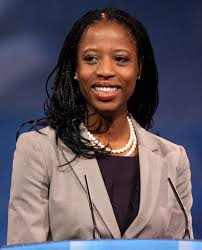 Mia Love, the Republican from Utah stole the show at the GOP convention in November of last year, but narrowly lost in an attempt to unseat Jim Matheson the Democratic Representative.

The Mayor of Saratoga Springs saw her prospects of winning that same House seat in the midterm election in 2014 sharply increase on Tuesday. Matheson announced he would not be seeking his eighth term, which allows Love to face a non-incumbent in the state were Mitt Romney took 72% of the state’s vote.

Republicans in Washington were ecstatic over the announcement by Matheson and called it a red flag for other incumbent Democrats in a time of ObamaCare.

Officials from the Republican Party said that the departure of Matheson gives the GOP such a clear path to win in the seat that it can use campaign money in other campaigns were it is needed more.

However, on Wednesday, the GOP stuck to a policy of not endorsing party primary candidates. A spokesperson for the Party did say that Love, who if she were elected, would become the first black GOP congresswoman, is part of the recruiting class for 2014, referred to as the Young Guns.

As well as running in a Republican leaning district, the Mayor of Saratoga Springs already has over $475,000 raised and a campaign that is established.

She captured the Republican Party member’s imagination with her convention speech in Tampa with notable phrases that told President Obama they were there to tell him they were not buying what he was selling.

However, Love has her critics who say she must avoid several possible pitfalls that hurt her last year, including the putting forth a better campaign and winning more Hispanic votes.

Matheson took over 71% of the vote by Hispanics, compared to just 27% by Love, while Jim Vein a Libertarian candidate earned 2.6% of the Hispanic vote and Matheson only defeated Love by just over 1%.

Love praised Matheson’s years of service to the public, after hearing of his retirement plans.