You are here: Home / Science / Researchers Invent an Artificial Jellyfish Skin Which Glows When Sensing Too Much Pain (Study) 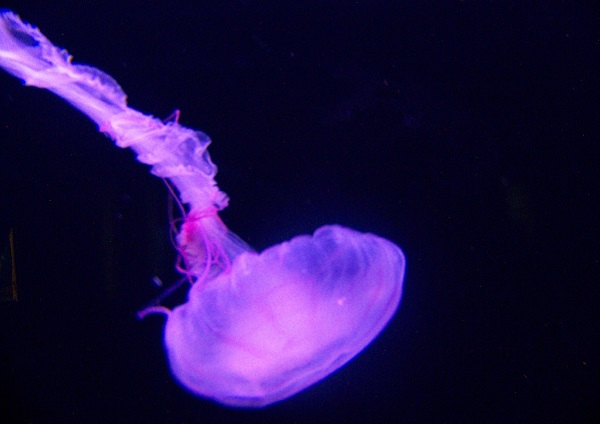 The artificial jellyfish skin can sense pain, and it signals it by glowing

A team of scientists from Huazhong University of Science and Technology, China, managed to develop a sensitive robotic skin which can react to pain stimuli by releasing a glowing effect. They took inspiration from jellyfish skin in developing this innovative material, and are planning to use it for the development of more advanced prosthetics, or for the design of robots.

The artificial jellyfish skin does have a pain threshold

This artificial jellyfish skin can imitate the response real skin has to pressure. Other similar materials can also feel pressure, but they do not have a certain threshold beyond which it becomes unbearable. This means they can tell there is a pressure put on them, but cannot measure its intensity and tell when it’s too much.

However, this artificial jellyfish skin is different. Apart from detecting pressure, it uses pain receptors to measure the changes in the intensity of the touch. Also, since it doesn’t lack sensitivity, it becomes more resistant to deterioration. This is a great technology to make robots more lifelike prosthetics more like a natural limb.

The mechanism is inspired from the Atolla jellyfish

Therefore, when this material senses too much pressure, the pain sensors make it glow. When developing this mechanism, researchers got inspired from a jellyfish called Atolla, which releases bright flashes whenever it feels threatened.

They introduced sensitive silver wires beneath the artificial jellyfish skin which can react to pressure. These wires transmit electric signals to some luminescent phosphors, which cause the glowing effect. This amazing mechanism is incredibly similar to the one exhibited by human skin.

During testing, researchers administered pressure of different intensities on the material, and measured its pain threshold. By watching how it turns to glowing, they managed to construct the visual aspect of how pain actually feels like.

The study has been published in the journal ACS Applied Materials & Interfaces.
Image Source: Flickr