You are here: Home / Science / Right Before Its Demise, Cassini Captured a Breathtaking Photo of a Crescent Enceladus 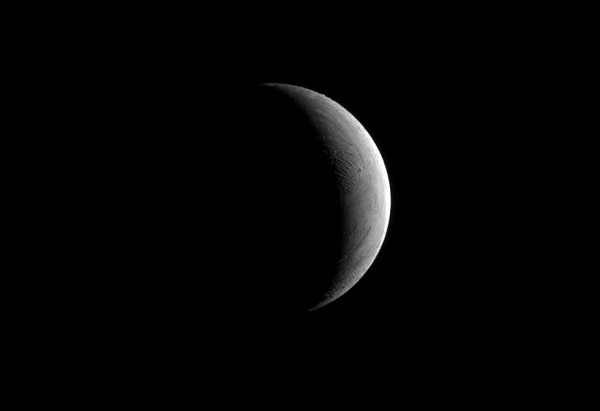 Cassini shot an eerie image of Enceladus during a crescent phase

Before diving into the abyss of Saturn’s atmosphere, Cassini captured a lot of images of the planet and its moons, offering the best view we have had so far of the ringed giant. One of the most impressive captures of Cassini was an image with the moon Enceladus, lit from behind by the sunlight and showing a tiny crescent.

Cassini captured the most beautiful photo of Enceladus

For twenty years, Cassini kept orbiting around Saturn and its moons, taking shots of the objects from all angles, and gathering a total distance of eight billion kilometers. It attained the closest point ever reached by a spacecraft near Saturn, and brought us perspectives on the planet which had remained unknown until now.

One of the most impressive images Cassini managed to capture features the moon Enceladus. The beautiful picture displays the moon showing a thin and bright crescent being lit up by sunlight from behind. Cassini captured the moment on March 29th, 2017, as it was situated at a distance of 180,000 kilometers away from it.

The shot displays one of the most beautiful views ever contained in an outer space photograph. The crescent gets a bright outline as it is surrounded by darkness, and the rest of the moon gets an eerie appearance, as light is shining from behind it. Unfortunately, the angle at which the photo prevents the famous plumes from being visible.

Leading Cassini to its demise was a bit tragic, but necessary. Getting to close to the moons or the planet itself was too big a risk. Some of the moons might actually host some kinds of life forms, and intervening on them might seriously contaminate them. Therefore, the only choice left for astronomers was to send Cassini to its death after it offered us such a beautiful insight on the surroundings of Saturn.
Image Source: NASA Jet Propulsion Laboratory