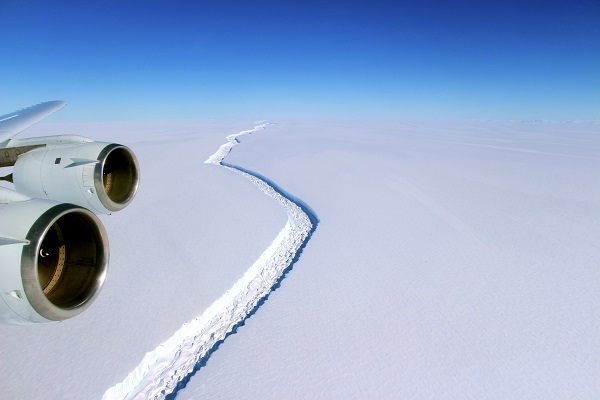 In December 2016, scientists warned the world about the formation and expansion of a massive rift in one of the world’s largest glaciers, the Larsen C ice shelf. Since it was first discovered, scientists have examined its evolution and determine that in the last three weeks the crack has increased in length by 6 miles.

Iceberg calvings are becoming increasingly common as the average temperatures at both of the planet’s poles keep increasing. However, what makes this case particularly important is the sheer size of the iceberg which scientists think will break apart from the main ice shelf in the upcoming months.

If the current pattern continues, the Larsen C ice shelf will continue to grow. Currently, there are only 12 miles of ice which still connects the iceberg from the main part of the ice shelf. However, when it finally breaks apart from Larsen C, which is Antarctica’s fourth largest ice shelf, the resulting iceberg will be the size of the state of Delaware.

Furthermore, scientists believe that the calving of the iceberg will only lead to more instability as Antarctica has lost around 10 percent of its total floating ice, and will further accelerate any further loss of ice.

Scientists who keep a close eye on the crack in the ice shelf are part of a program known as Project Midas. In consists in the monitoring of the rift as well as the assessment of the iceberg’s impact, after it calves. The future event will be the largest one in the last century. Scientists part of Project Midas such as Adrian Luckman believe with certainty that the calving will occur in the coming months.

Due to the fact that the iceberg breaking apart from the main ice shelf is mainly floating ice, it will not increase global sea level. The iceberg will continue to float away from Antarctica, but it will gradually begin to melt as temperatures increase. Furthermore, its calving will expose the land ice to the ocean. Another future calving of land ice will surely lead to a much higher increase in sea water levels of around 10 centimeters.

What do you think about the crack in the Larsen C ice shelf?