You are here: Home / Science / Frogs Use Reversible Spit to Catch and Hold Prey 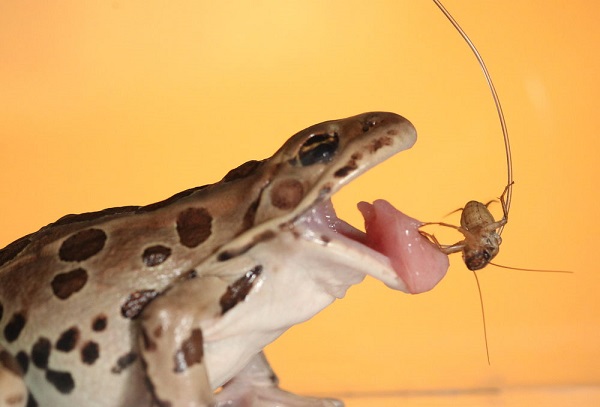 Scientists found that frogs have a reversible spit and soft tongues.

For humans and the vast majority of animals, saliva serves an important purpose in the first phase of the digestion as it hydrates our mouth cavity and enables us to swallow food more easily. However, it seems that frogs are able to create an incredible reversible spit which is sticky as a way to catch and hold prey.

A new study conducted by researchers from the Georgia Institute of Technology and published in the Journal of the Royal Society Interface, explains the mechanics involved in how frogs are able to catch prey with their tongues.

Their sticky tongues allow them to easily catch and hold various insects thanks to a unique reversible saliva and their very soft tongue. When the frog prepares to catch prey, the saliva becomes thick and sticky. However, as soon as the prey is devoured the saliva becomes thin and watery again.

Researchers have discovered that the tongue of the frog is very soft, much like brain tissue and around 10 times softer than a normal human tongue. Furthermore, it’s capable of stretching impressive lengths as it stores energy similar to that of a spring.

The combination of reversible spit and the softness of the tongue is very efficient, providing the frogs with a system that has 50 times more adhesion that synthetic polymers used in various products like sticky-hand toys.

In order to better understand the mechanics and physics of the frogs’ tongue, the searchers filmed and observed them eating crickets in super-slow motion. The scientists also collected various samples of saliva and poked the tongue tissue of multiple frogs to measure its softness.

According to Alexis Noel, the lead author of the study and a mechanical engineering Ph.D. student at Georgia Tech, the tongue acts similar to a bungee cord. The tongue is capable of deforming itself as it the frogs pulls it inside their mouths again. The high applied force is continuously being stored in their stretchy tissues and being dissipated through internal damping. This internal tissue damping is similar to that of a car’s shock absorbers.

The reversible spit actually has three phases. When it first hits an insect, the saliva is still watery as a way to enter a bug’s crevices. When the tongue begins to snap back, the saliva becomes sticky, and it turns watery again as the insect is being eaten.