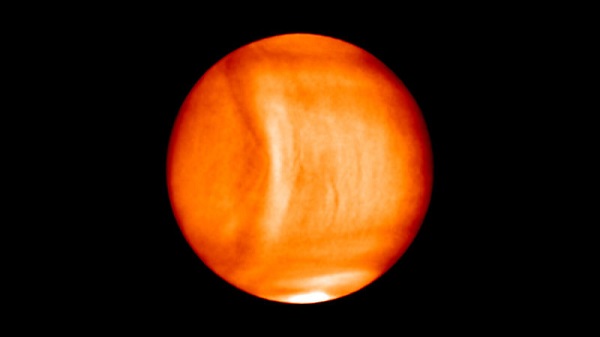 Astronomers temporarily detected a giant wave in the atmosphere of Venus.

Japanese astronomers were able to detect an anomaly in the atmosphere of Venus thanks to the Akatsuki spacecraft. The anomaly seems to be similar to a giant wave that travels along the planet. The anomaly is 6,200 miles long and its surrounded by winds which can reach 225 miles-per-hour, which doesn’t seem to affect it.

The giant wave anomaly on Venus was detected by researchers from the institute of Space and Astronautical Science with the Japan Aerospace Exploration Agency. The scientists believe this anomaly to be the largest gravity wave ever detected in the solar system. According to the scientists, it’s characterized as a strange weather phenomenon emanating from the mountains just below the planet’s atmosphere. It is strong enough to endure the high-speed winds which surround it and causes the bow-like structure to hang in the high atmosphere levels of the planet similar to a giant scar.

Venus, as the second planet from the sun, has high temperatures and strange atmospheric behavior as it is covered in clouds. One such weather phenomenon consists in the high-speed winds which can reach 223 mph. The speed of the winds is faster than even the rotation of the planet as a rotation along its axis lasts longer than its rotation around the sun. Furthermore, it features thick clouds rich in sulfuric acid.

Japan’s space agency known as JAXA launched the Akatsuki orbiter in order to investigate the cloud physics and atmospheric dynamics of the planet. In the late months of 2015, the orbiter made several strange observations over the course of a few days. The observations were analyzed by JAXA astronomers led by Makoto Taguchi and their findings were detailed in a study published in the journal Nature.

The spacecraft detected the stationary bow-shaped anomaly which resembles a giant wave. Scientists analyzed the observations made by the spacecraft in both middle infrared as well as the ultraviolet spectrums. It revealed that the anomaly resides 40 miles above the surface of the planet, had high temperatures and did not move at all as it remained static above a mountain range.

After several weeks since the giant wave was first observed, the anomaly disappeared leading to the conclusion that it was not a permanent feature of the planet. Nonetheless, scientists are eager for the return of anomaly which was very likely caused by a gravity wave.