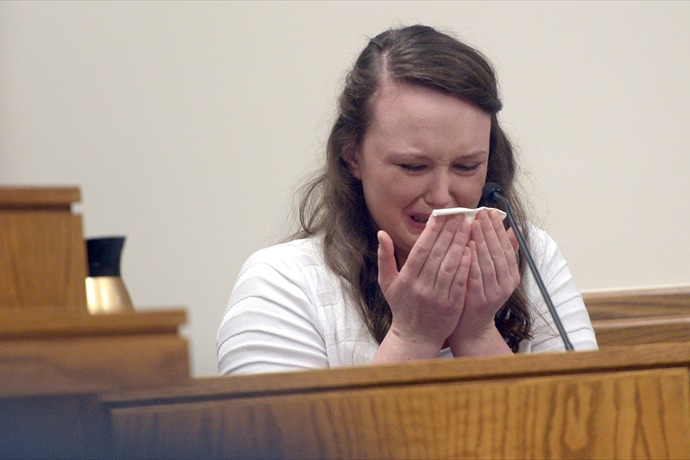 It took a bit over 11 hours for the jury to come to a verdict in the case of the 18-year-old Meagan. Despite the fact that Grunwald did not pull the trigger herself, Utah law does not accept aiding and abetting.

The 18-year-old was her boyfriend’s accomplice in his fatal crime spree. Meagan drove the Utah man over 50 miles all the while shooting at police officers and sheriff’s deputies. The shootings resulted in the death of one deputy, County Sheriff’s Sergeant Cory Wride and the injuring of another, Deputy Greg Sherwood.

Deputy Sherwood luckily survived a critical shot to the head.

According to prosecutors, Meagan’s violent love of a much older boyfriend, Jose Angel Garcia Jauregui, drove her to the actions she now stands accused of. She therefore drove the getaway vehicle across three counties in a chase that had dear consequences.

Grunwald and Garcia were stopped by Sgt. Wride alongside a road. Fearing that Sft. Wride would recognize Garcia (who, at the time, had an warrant out for his arrest), he killed Wride and forced Grunwald to drive off.

During her testimony, the 18-year-old told the jury that she was afraid of stopping the vehicle. Her boyfriend allegedly turned the gun on her threatening to kill her entire family if she wouldn’t continue driving. The tear-filled moment, however, did not convince the jury of Meagan’s innocence.

The jury, comprised of two men and six women, began their deliberation on Friday afternoon and returned on Saturday at 12:35 AM with a verdict.

Dean Zabriskie, Grunwald’s defense attorney, expressed the family’s disappointment with the verdict, noting that they were planning to appeal the jury’s decision.

The sentencing part of the trial is planned for the 18th of July, when Grunwald will find out whether she will spend life in prison. Luckily, at the time of the shootings, the teenager was only 17. Consequently, she is not eligible for the death penalty.