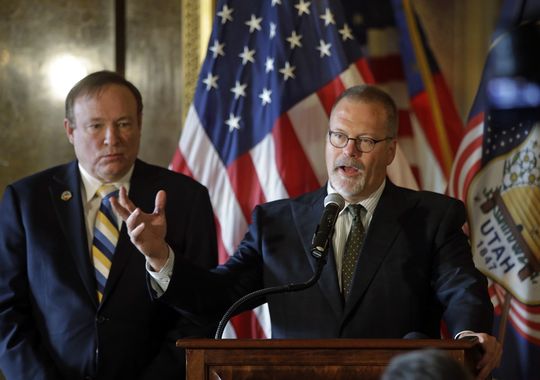 A new bill was introduced in Salt Lake City on Thursday, bringing the chance for Utah senators to set anti-discrimination rules for same-sex marriages. The proposal, scheduled for a vote on Friday, would allow county clerks to refuse to marry same-sex couples, but only if they give up the right to marry anyone.

The Senate bill 297 offers the government workers the possibility to refuse to perform a gay marriage on religious claims, but guarantees that a public office will have a designated person who will accommodate same-sex couples. Senate Majority Whip, Republican Stuart Adams, told the media that “You’ve got to have somebody to do that. We mandate that a county clerk has to do it or find somebody to do that. If no one in the community can do it, the clerk has to.”

The bill however also specifies that clerks who have religious objections to same-sex marriages cannot be held accountable for their convictions, while also allowing religious organizations to refuse accommodations contrary to their belief.

The new legislation piece has generally enjoyed support from both LGBT rights activists and religious leadership, namely The Church of Jesus Christ of Latter-day Saints, of which most state lawmakers are members. The Republican controlled Senate offered its unanimous and rather enthusiastic support for the proposal. Todd Weiler, a senator with a Mormon background, said that: “I understand that those people are different than I am, and that they have rights, and I am 100 percent convinced that they should be protected.”

There are also groups that said they are not pleased with the bill, or more specifically on the drafting of the language. Utah legalized same-sex marriages last year, and LGBT rights group Equality Utah assured they will not offer their support to “any legislation that may adversely impact the fundamental rights of LGBT Utahns”.

The proposal effectively prohibits discrimination based on sexual orientation when it comes to housing or employment. But it also gives religious organizations room to exempt themselves from the requirement. It has been described by state senators as a milestone in the struggle against sexual identity discrimination, while also being acceptable for the conservative religious groups. Overall, it may be concluded it offers a successful compromise for all sides, which some view as a better outcome than a winner-take-all situation.

By equally appeasing both parties, the Utah legislators hope to serve as an example for other states. Idaho state Sen. Cherie Buckner-Webb already characterized the gesture as proof that Utah is a state moving forward, and is looking forward to implementing the same kind of laws in the state she represents. The bill is scheduled for a hearing and voting on Friday afternoon.