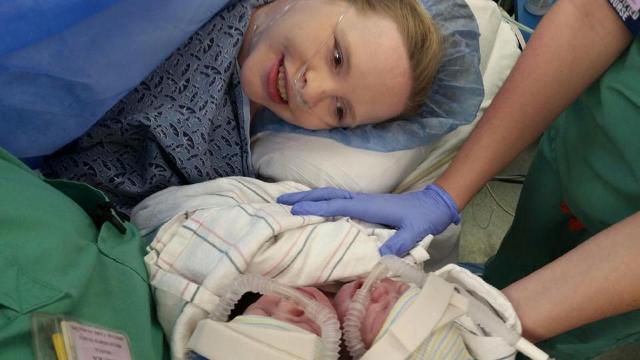 Robin Hamby from easy Alabama town of Ladonia gave birth to a special set of twins on Thursday morning, with the assistance of C-section. Little Asa and Eli were born conjoined, which is a very rare event in itself, University of Maryland statistics suggesting that it only happens once every 200,000 live births. They cannot be separated because the boys share a heart and circulatory system, which iss an ever rarer occurence. They are joined side-by-side, a condition known as dicephalic parapagus, and they share a torso, arms and legs.

Darria Glilespie, Emory University professor and physician says that mortality rate is particularly high in conjoined twins, 40 to 60 percent arriving stillborn and 35 percent survive for only one day. Considering they share a vital organ, their lives are in danger due to the heart failure risk and not being able to sustain them. More so, male conjoined twins are much rarer than female ones: 70 percent of conjoined twins delivered are girls.

First news received on the boys by 8 AM on the day of birth was that they were doing amazing, and that their condition was stable after a 37 week pregnancy. They are currently held on assisted air, in incubation but their state seems to be promising. Nevertheless, doctors say that the twins have a long, tough road ahead of them, consistent with multiple surgeries. Surgery on the infants might pose a threat to their lives as they will be exposed to developing infections due to blood loss, but specialists will be doing everything they can to assure the twins survival.

Robin’s husband, Michael Hamby is overwhelmed by the event and has been keeping his family, friends and media updated through a special Facebook page he made for the twins. He has been posting videos to keep the thousands of people currently following the twins’ developing condition and asked for prayers on Wednesday evening, before Robin went into labor. Donations can be done via the Twins Benefit account or any branch of Wells Fargo by anyone wanting to assist the family with medical costs.

Michael and Robin Hamby have expressed their appreciation for all the well-wishing, messages of encouragement, love and support people from all over the world have been sending them, but right now the family needs privacy as the next steps are being taken for the wellbeing of the twins. Soon, they will be transferred to another hospital to undergo more extensive testing on the heart they share.