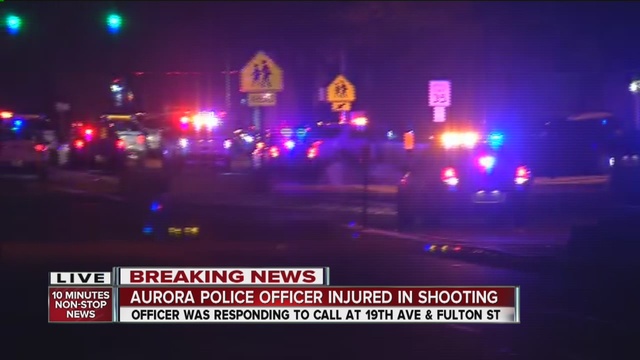 An Aurora police officer was shot Friday night in west Aurora, in the 1700 block of Fulton Street, giving rise to a massive manhunt. Frank Fania, Aurora police spokesman, said that a marked patrol car with two uniformed patrol officers made a traffic stop at East 17th Avenue and Fulton Street about 9:05 p.m. Afterwards shots were fired from inside the car, hitting one of the officers. The second officer returned fire but it isn’t known whether he hit anyone inside the vehicle.

The suspect who shot the officer then took off. No description of the suspect has been released. The car was found a short time later in the 1900 block of Fulton Street. During the investigation, police found out the car had been stolen a short time earlier. The car had been left running and unlocked while unattended, commonly referred to as puffing.

The wounded  police officer was transported to a nearby hospital and underwent surgery early Saturday, according to the spokesman for the Aurora Police Department. There were no further details unveiled regarding his condition.

The Jefferson County Sheriff’s Office and Denver Police Department were on the scene to assist with the investigation.Police do not know if the suspect was hit.

“We have no clue where this individual is,” Frank Fania, Aurora police spokesman said. “We don’t know which direction he went off in. But an individual who shoots a police officer is a huge threat.”

Moreover the Police warned residents of the neighbourhood (north of Crawford Elementary School) to stay in their homes. At the same time Police are still trying to locate witnesses. Anyone with information is asked to call detective Warren Miller at 303-739-6117. You can also remain anonymous by calling Crime Stoppers at 720-913-STOP (7867). You may be eligible to earn a reward up to $2,000 for providing relevant information.

A helicopter has been deployed and police K-9 units were aiding in the search. “We have a lot of resources out here,” Fania said late Friday. He also explained authorities were doing a “systematic search in all directions.(…) Hopefully, we’ll find this guy soon,” he said.

“For an individual that just shot at an officer, it’s a huge threat,” Fania said. “We don’t know if he still has a gun. We’re assuming he does.”