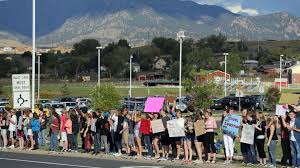 Denver Students are still demonstrating against the proposed history curriculum which must promote “positive aspects” of the United States and its heritage, while avoiding material that could encourage or condone “civil disorder”, “social strife” or “disregard of the law”.

The Jefferson County Board of Education promised to begin reviewing the curriculum, and the AP history course is expected to be the first on their list. According to Julie Williams, who proposed this review, all board members want is to make the class more balanced.

The Republican National Committee and the Texas State Board of Education have criticized the elective course, as it gives greater attention to the history of North America as well as its native population. Critics believe that it downplays the colonization and the settler’s success as they established a new nation.

While the initial proposal has been amended, and the student board will no longer emphasize on promoting patriotism while downplaying social disorder, students believe that political interests should not simply change a history curriculum. They also insist that board members will ultimately attempt to change the course to suit their views, in spite of claiming that they have let go of the initial proposal.

On Friday, students, parents and teachers alike protested along a busy boulevard.

“This is tyranny in slow motion. This is how it happens. We all need to stand up and raise our voices,”

Toni Johnson Boschee said while protesting on Friday. She expressed her frustration with the board and its blatant disregard of so many parent, student and teacher voices. She also said that the board hadn’t been open to engage in conversation with those opposing the history curriculum.

The course as well as other AP classes are administered by the College Board, which is responsible for the preparation of students for college. According to the Board, the framework isn’t exhaustive and it allows teachers to add material that is relevant to their states, as the course is built around themes such as “politics and power” or “environment and geography”. They explain that, for instance, the framework does not mention Martin Luther King. Jr. while it does the Black Panthers, because apparently, teachers know how to include King.

Veteran history teacher Larry Krieger outlines the faults of the framework: it has a global, revisionist view and depicts, as he believes, the U.S. as arriving in Native American occupied territory and becoming an imperial power, while examples of cooperation and unity are downplayed.

“Native Americans were defeated, wrongs were done, African-Americans were enslaved. However, at the same time this was going on, democratic institutions were being established, there was religious toleration and a new society was being created,”