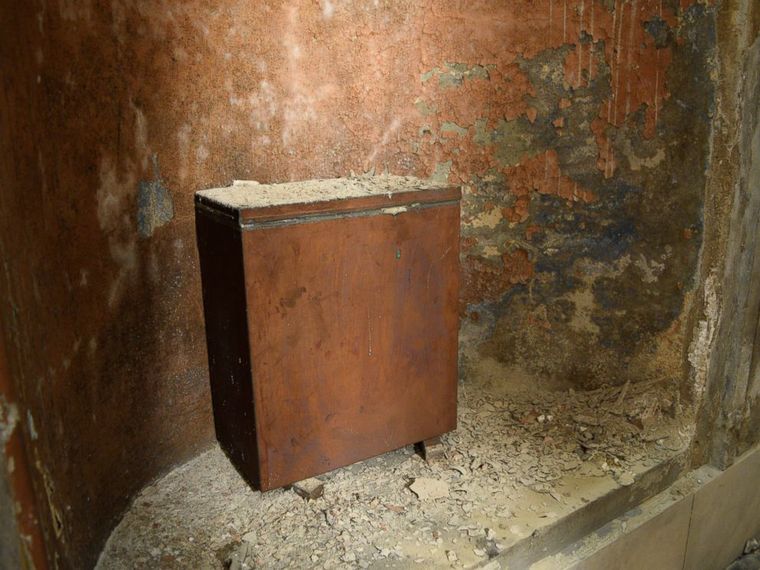 A mysterious box has been discovered during restoration works at Washington Monument in Baltimore. The box was placed behind a commemorative plaque from 1915 and has not been opened yet.

Baltimore’s Washington Monument was erected in 1815 and is one of the country’s oldest monuments dedicated to the first president. The commemorative plaque was installed when the monument turned one hundred.

The monument undergoes massive restoration works, as infiltrated water may have damaged the foundation. According to the schedule, the monument should be reopened to visitors on July 4, 2015, just in time for its bicentennial celebration.

The restoration committee is content with what they discovered so far during the project that started in the beginning of the year.

“We found a lot of signatures and dates. There are signatures that we found in the basement from between 1819-1829. In a lot of the stones outside, we found craftsmen’s names and dates, and just about three weeks ago, we found a commemorative date stone right from about 1820,” said Dr. Lance Humphries, a member of the restoration committee.

But when a worker had to investigate the state of the walls behind the plaque, he has no idea what lied behind it. The discovery took place on Oct. 16.

“We hoped that there would be something back there, but we didn’t think there would be. I removed the plaque just enough to stick the camera behind there to take a photo. When I realized what was on the photo, I put the plaque back and I called Dr. Humphries,” George Wilk, with Lewis Contractors, told ABC2. He sent the picture along with the message “the mystery awaits.”

The copper box seems to be in a perfect condition. Because it was soldered shut, its content should be fairly well preserved. Moreover, it was placed on shims to avoid corrosion, which would have been unavoidable considering the leaks behind the plaque. The box was moved to the nearby Walters Art Museum, where further investigation will determine if and when it will be opened.

The Baltimore Sun published an articles in 1915 saying that the time capsule should contain souvenir programs from the centennial celebration, as well as some newspapers. However, Dr. Lance Humphries hopes that other more exciting items will be discovered once the box will be opened.