Over two hundred residents were forced to leave their houses on Sunday when two wildfires in California went out of control. One of the wildfires occurred near a lake side resort town, where it also destroyed several structures. Authorities say that the blaze sparked at approximately 1:30 PM near bass Lake, in Central California. In light of these events, authorities were forced to evacuate 1000 residents from 400 homes, says Madera County Sheriff’s spokeswoman, Erica Stuart. 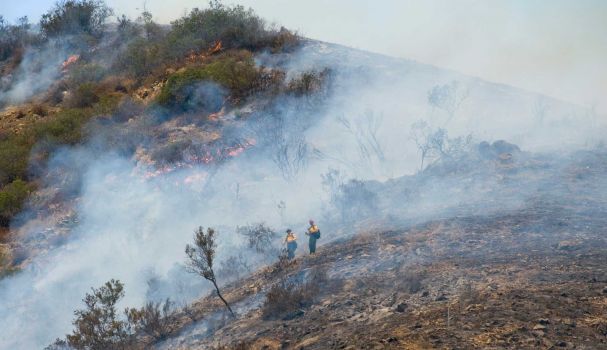 “I know 10 structures have been destroyed already,” – Erica Stuart

The fire, which began off a road between a foothill community and Oakhurst, south of the Yosemite National Park started moving towards Bass Lake. It was stroked up by the winds so it quickly blazed through 320 acres, says the California Department of Forestry and Fire Protection, Daniel Berlant. The bad news is that this region is extremely popular for travelers all year.

“We have a lot of full-time residents as well as renters and people with vacation homes here.” – Stuart

The second fire began approximately 60 miles east of Sacramento. It prompted the evacuation of 133 homes. In addition to this, El Dorado County Sheriff’s officials urged another 406 homes to be prepared to flee. According to Berlant, this blaze was sparked in a remote area on Saturday, but it grew exponentially on Sunday, when it also reached a canyon full of thick, dry brush. It has burnt 4 square miles and is currently, only 10% contained.

In the meantime, evacuation orders were lifted from 200 homes in Orange County’s Silverado Canyon, because the fire was, finally, 50% contained. Most of the residents were evacuated on Friday, right after the fire broke out. The U.S. Forest service reduced the blaze’s size from 2 1/2 square miles to 1 1/2 square miles due to better mapping of the fire.

On the bright side, only six firefighters suffered minor injuries (many of which are related to heat -the origin baked under triple-digit temperatures).

The wildfire in Sierra Nevada foothills (close to Sacramento and Reno) also burned roughly 250 acres and destroyed 5 structures (2 homes and three outbuildings). The homes that burnt were from Alta Sierra, a small community about 5 miles of Grass Valley.

Lastly, a heat-wave is expected to hit and last until Tuesday in Southern California. This prompted a smoke advisory to take effect in for parts of Riverside and Orange County. Also, Berlant reassured people that they are making progress with the two wildfires that broke out Saturday in Northern California.