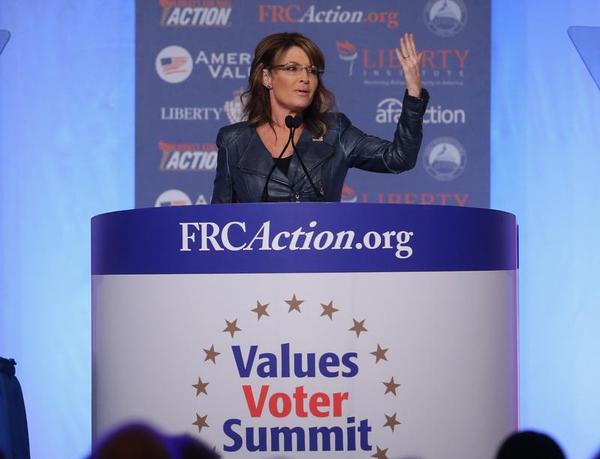 President Obama was harshly criticized by many after his coffee-cup salute gaffe, when he stepped off a Marine One in NYC and failed to properly salute waiting Marines (the president held onto the cup as he saluted).

So when Sarah Palin first had a chance to take a jab at the president, she simply told the audience that she was saluting the commander-in-chief while sarcastically waving a coffee cup over her head.

Palin then accused the U.S. President of being incapable of speaking the truth, as are all the residents living at “1400” Pennsylvania Avenue. According to her, President Obama simply can’t stop telling lies.

Despite her White House address gaffe, Palin made some spot on remarks. Obama’s casual approach at the moment when he was leaving the Marine One chopper came precisely in the context of the U.S. instructing aircrafts to engage in perilous missions over Iraq and Syria.

Palin then spoke about abolishing the Internal Revenue Service, right after she told her audience that Obama’s attitude had, in fact, been tragic.

“I was wondering your take on Obama saluting with a coffee in his hand? Big deal or no? Terrible!”

Former Gov. Palin had made the news earlier in 2014 when she advocated for President Obama’s impeachment for executive overreach. During her speech on Friday, Palin did not mention impeachment. However, she did describe the U.S. President as being a lawless and imperial president.

“We wear your scorn with pride. The lies you tell about us mean you can’t win the argument, so you tell lies about us. We win.”

Palin said when speaking about the left’s lies about conservatives.