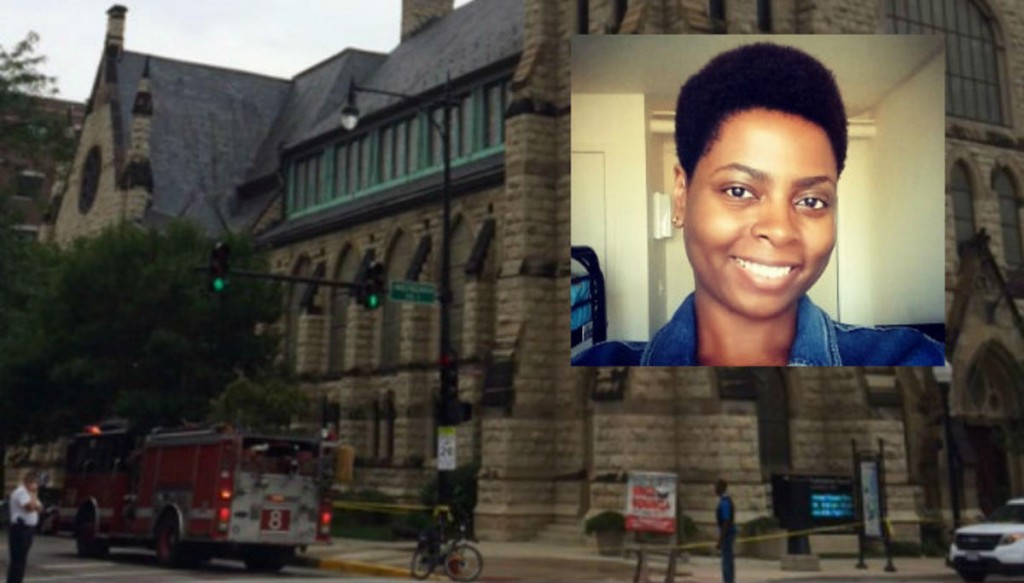 A decorative stone piece that fell from the Second Presbyterian Church in the 1900 block of South Michigan, Chicago killed a 34-year old woman while she was heading towards lunch with her finacé, Lance Johnson.

The woman, identified by family members as Sara Bean, was hit directly in the head. The two were walking past the Second Presbyterian Church in Chicago’s South Loop Thursday when a piece of metal broke loose from the church’s roof. The debris fell into a statue of a gargoyle, knocking it from its perch and to the ground three stories below. “[Johnson] was walking and he looked both sides to see where [Bean] was at and he turned around and realized that she got hit by a brick,” witness Deapolis Moore told MyFOXChicago.

“She fell flat down in the street, her hands started clenching, like trying to catch air or things like that, trying to stay alive,” described Broderick Adams. “I just see something come down, and I look closely and I just see the lady fall down, really falls down, and the guy just starts yelling hysterically like something was really going on,” witness Broderick Adams said.

“I was close up on her because I was trying to calm [Johnson] down because he was real hysterical about the situation so she was gone right when it happened.”

Bean was transported in critical condition to Northwestern Memorial Hospital where she was pronounced dead.

“She was a beautiful person,” her brother, Michael Willis said. “This is not good. This is not something you expect at all. I can honestly say she was a good person, a genuinely great person,” he added. “Anybody could depend on her, she was very dependable, very loved, and we’re gonna miss her.”

The victim’s family said Bean was the mother of two young boys, ages 10 and 14, and was going to get married soon. She lived across from the church and worked at Ann & Robert H. Lurie Children’s Hospital of Chicago.

Mimi Simon, spokesperson for the City of Chicago Department of Buildings, said city-building inspectors also responded to the scene Thursday. “As assessment determined that a corner of one of the metal decorative pieces on the exterior of the building gave way,” Simon said in a statement. “When it fell, it struck the gargoyle on the southeast corner of the steeple, causing a portion of the gargoyle to fall, striking the victim.”