You are here: Home / National News / White House Talks about a Government Shutdown 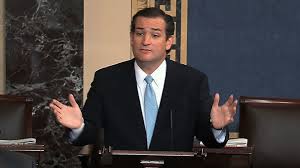 The Americans for Prosperity conference that took place this weekend was centered around speeches made by several 2016 presidential candidates such like Texas Gov. Rick Perry and Sen. Rand Paul. But neither of them could outshine Sen. Ted Cruz, whose speech addressed the hawkish foreign policies and the Affordable Care Act all the while defending constitutional rights and questioning the problems with immigrants on the southern border.

Senator Cruz also addressed the issue of executive action on immigration and insisted that President Obama has no authority to offer amnesty grants to anyone. He added insight concerning the situation and stated that the entire immigration problems at the southern border were created solely by the lawless actions of President Obama.

Sen. Cruz went so far as to invite President Obama to visit the southern border while inviting him to a round of golf. In a more cheeky statement, Cruz asked the people in attendance if they know people who play that much golf. Then he nonchalantly added that it would seem as though President Obama didn’t have a job.

Then Sen. Cruz moved on to more pressing issues such as the situation in the Middle East and explained that he doesn’t enjoy the Obama diet that Americans have been eating for a while: the diet in which Putin eats your lunch. He explained that the entire situation in Syria and Iraq makes a mockery of America since the Islamic State has seized control of the countries when the United States could “bomb them back to the Stone Age”.

Apart from President Obama, Sen, Cruz also targeted other American officials: Senate Majority Leader Harry Reid for instance was also included in his speech, as Cruz stated that Reid should be voted out if the First Amendment was something people believed in.

The crowd offered Senator Cruz standing ovations and chanted “Run, Ted, Run” as soon as he appeared on stage.

Cruz remained modest, however, when he was asked about his expectations for the 2016 Republican nomination. He did admit that they were going to win in 2014 and that 2016 would be even better.