You are here: Home / National News / Whale in Elizabeth River, VA is Most Likely Sick 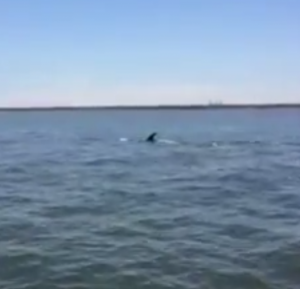 As peculiar as it may sound, a whale has been sighted in the Elizabeth River, in Chesapeake, Virginia. The whale has been behaving quite erratic, which lead the Coast Guard to assume that the animal is most likely sick. It released a statement which advises boaters to avoid the whale, and people to avoid approaching it or feeding it.

The whale is estimated to be around 30 to 40 feet large and it was found on August 19, 2014 swimming in the heavily trafficked Virginia river. The Elizabeth River floats into the Chesapeake Bay.

The Coast Guard has been investigating the issue and until they come up with a solution, they urged people to stay as far away as possible from the whale, especially if they see it swimming above the water.

A member of the Virginia Aquarium & Marine Science Center, Mark Swingle, has not yet managed to positively identify the whale, but he believes it is a sei whale. They are very large, reaching sizes of up to 65 feet long and weighing up to 20 tons. Swingle added that the whale’s inconsistent behavior could indicate that the whale is ill. The same reason could be behind it being in the Elizabeth River.

Brook Smith, the captain of the American Rover, saw the whale on August 15 swimming in circles for about 20 minutes. He continued:

It seemed to be kind of swimming in circles — no particular direction. I’m not a whale expert, but it looked ill. […] It’s not in a normal place.

As anyone would guess, it is highly unusual for sei whales to be swimming in water close to the coast line, as they prefer deeper water. Sei whales are also very hard to spot by humans, as they are an endangered species. The WWF for Nature state that sei whales are a priority species, which makes them very important to their ecosystems. They live in all the oceans of the world, but they prefer warmer waters.

A newspaper, the Virginian-Pilot, uploaded a video footage of the whale swimming in the Elizabeth river; the picture included in this article is a screenshot from that video. Any sightings of the whale should be reported to the Virginia Aquarium, at (757) 385-7575.

People and boaters should not approach the whale. The fine for threatening a member of an endangered species is $50,000.

What are your thoughts on this issue? What do you think the course of action for Coast Guard should be? Drop us a line in the comment section below.