You are here: Home / National News / Sister of Boston Marathon Bombing Suspects Made a Bomb Threat 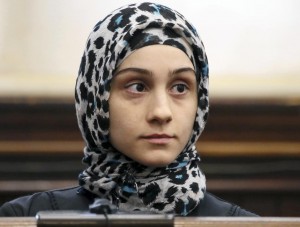 Aliana Tsarnaev, the sister of the 2013 Marathon Bombing suspects, the Tsarnaev brothers, allegedly made bomb threats to a woman in Harlem by phone. She was arrested on Wednesday afternoon after allegedly threatening to bomb her boyfriend’s former girlfriend. The young woman was charged with aggravated harassment.

The victim was Tsarnaev’s boyfriend’s ex-girlfriend, the mother of his children. She told the police that Aliana Tsarnaev called her on Monday and threatened her. The two women had a history of not animosity, but when Tsarnaev made the bomb threat, she decided to go to the police.

The victim said Tsarnaev told her: I have people who can go up there and put a bomb on you.

The young woman was placed into custody after turning herself in at the 30th Precinct stationhouse in Harlem. She was questioned, given a desk appearance ticket and charged.

Aliana Tsarnaev’s brothers, Tamerlan and Dzhokhar, are suspects in the bombing of the Boston Marathon finish line on April 15, 2013. The brothers are accused of making and using two homemade bombs near the finish line, which resulted in the killing of three people and injuring of more than 260 people, including 16 people who have lost limbs.

Tamerlan Tsarnaev was killed in a police shootout four days later after the marathon bombing in a Boston suburb. His younger brother, Dzhokhar, was apprehended by the police after being wounded in the shootout.

Tamerlan was born in 1986 in the Kalmyk Autonomous Soviet Socialist Republic and Dzhokhar in 1993 in Kyrgystan. There is still not enough information available about Aliana Tsarnaev, but what is known is that she is 23 years old and she, as her brothers and another sister, was born into a Muslim family. Their family had moved to the United States after their father was granted asylum.

We will keep you posted with more news about this case. What are your thoughts on this news? Do you think this is just a domestic dispute that escalated or does it pose a genuine threat? Share your thoughts with us in the comment section below, we love hearing from our readers!