You are here: Home / National News / Same-Sex Marriages to Begin in Virginia 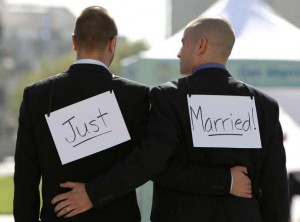 Same-sex marriages will begin to happen in Virginia, as a federal appeals court has cleared the way for them. If the nation’s highest court intervenes, this all could be put on hold for an indefinite time, as it has happened before throughout the country.

Along with same-sex marriages that could take place in the state of Virginia, the state would also need to begin recognizing marriages that happen out of state and this could happen as early as next Wednesday. The state’s gay marriage ban was struck down after the 4th U.S. Circuit Court of Appeals’ decision not to further delay the ruling.

Supporters of gay-marriage are excited about the news, but also a bit reserved, as the U.S. Supreme Court could put same-sex marriages on hold once again if the opponents win an emergency delay.

Virginia’s loving, committed gay and lesbian couples and their children should not be asked to wait one more day for their fundamental right to marry.

Himself, the organization he stands for and supporters of gay-marriage understand that the decision will most likely be appealed and until then any prospect of marriage equality will be on hold.

Carol Schall and Mary Townley of Chesterfield County were married in California and wanted their union to be recognized in the state where they were living and raising their 16-year-old daughter. The Virginia lawsuit was filed by the two women and also by Timothy Bostic and Tony London of Norfolk, a couple who was denied a marriage license.

The voters of the Virginia state approved a constitutional amendment in the year 2006 that banned gay marriage, as well as barred the recognition of such unions that took place in other states. The ban was overturned by the appeals court ruling.

Nancy Leong, a law professor at the University of Denver, had this to say about the 4th Circuit’s decision yesterday:

[the decision] shows that there’s no longer a justification to keep same-sex couples from marrying. … I wonder whether we’ve reached something of a tipping point.