You are here: Home / National News / Ukrainian Government Destroys Russian Aid Convoy That Proved to be a Military Column

Friday marked another sign from Russia that it will not cease in its efforts of destabilizing eastern Ukraine. The government declared that Ukrainian troops had destroyed military vehicles that had crossed the border into eastern Ukraine.

According to an announcement on the website for the office of Ukrainian President Petro Poroshenko on Friday, a significant part of the military column was destroyed. 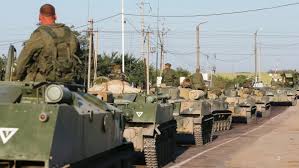 NATO leader, Anders Fogh Rasmussen, noted that British media had reported the armored personnel and the large column of Russian vehicles driving towards the border. He also added that these actions clearly prove Russia’s intent of continuously destabilizing eastern Ukraine. According to him, Russia is simply confirming that it will keep supplying separatists with weapons and fighters.

Kremlin denied any allegations that armored personnel had crossed the border when Ukrainian officials addressed the matter and reported that armored trucks had indeed come into its eastern regions.

The 300-truck convoy that Moscow claimed to be carrying humanitarian aid was stopped for inspection by Ukrainian officials. The fear that Moscow would attempt to re-arm pro-Russian separatists proved correct when Russian army vehicles were sighted just 30 kilometers away from the place where the aid convoy was being inspected.

To this situation, Russia only denied having directly armed rebels. Moscow claims that its convoys are only meant to help alleviate suffering in affected parts of Ukraine.

British Foreign Secretary Philip Hammond noted that the overnight crossing of Russian military vehicles would surely have serious consequences. He warned Russian officials that if said vehicles or military personnel are anywhere on Ukrainian territory, they should be immediately withdrawn.

In the meantime, cities like Luhansk or Donetsk are still without water or electricity and its citizens not only lack medical supplies but also provisions, while Ukrainian forces press on to end the rebellion brought on by pro-Russian separatists.

Igor Strelkov and Valery Bolotov, two pro-Russian separatists departed after the shelling of Donetsk where 25 people were killed.

On Thursday, Russian President Vladimir Putin visited Crimea to meet with Russian lawmakers on Thursday. On the Black Sea peninsula that was annexed to Russia earlier this year, Putin discussed with several lawmakers and officials, including German Gref, Sberbank President.

According to the Russian president, the current events in Ukraine can be described as an enormous humanitarian disaster. He added that Russia will be doing everything possible to ensure that the bloody conflict ends as soon as possible. Putin assured the public that Russia will not be mobilizing for war or any other kind of confrontation.