Robin Williams was found dead on Monday, August 11. The apparent cause of death was suicide by asphyxiation, it was reported by authorities. A toxicological report will be performed on August 12 and the results will be made public in the weeks to come.

The actor was 63 and he had been battling severe depression and alcoholism for decades. The last time he went to rehab was July of this year at the Hazelden Addiction Treatment Center. The police found the Williams unconscious and unresponsive in him home in Tiburon, California.

Robin Williams was one of the most beloved actors of our time, starring in comedies such as Mrs. Doubtfire and Good Morning, Vietnam, but also dramas to name a few: Patch Adams and Dead Poets Society. He rose to fame playing an alien on TV in the show Mork & Mindy and he won an Academy Award for Best Supporting Actor for Dr. Sean Maguire in Good Will Hunting. Roibnn Williams’ latest sitcom was a CBS show called The Crazy Ones, which was cancelled after one season. At the time of his death, there were talks for a sequel to Mrs. Doubtfire. 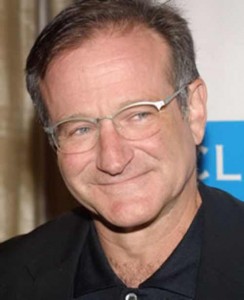 After being sober for 20 years, in 2006, the actor checked himself into rehab for alcoholism. He openly talked about his struggled with depression, substance abuse and alcohol and in an interview with The Guardian he said:

It’s not caused by anything, it’s just there. It waits. It lays in wait for the time when you think, ‘It’s fine now, I’m OK.’ Then, the next thing you know, it’s not OK. Then you realize, ‘Where am I? I didn’t realize I was in Cleveland.’

The actor’s wife, Susan Schneider, released this statement to the New York Times:

This morning, I lost my husband and my best friend, while the world lost one of its most beloved artists and beautiful human beings. I am utterly heartbroken. On behalf of Robin’s family, we are asking for privacy during our time of profound grief. As he is remembered, it is our hope that the focus will not be on Robin’s death but on the countless moments of joy and laughter he gave to millions.

Many celebrities have reacted to his death and shared messages of love and regret on social media websites, such as Twitter.

Thank you, Robin Williams, for your wonderful legacy! Share your thoughts on this terrible news with us in the comment section below.