Paul George, from the Indiana Pacers, was taken off court due to an injury during an USA Basketball Showcase. This happened on August 1, 2014. Doctors do not have excellent news for him, and say that his biggest battle has yet to come. 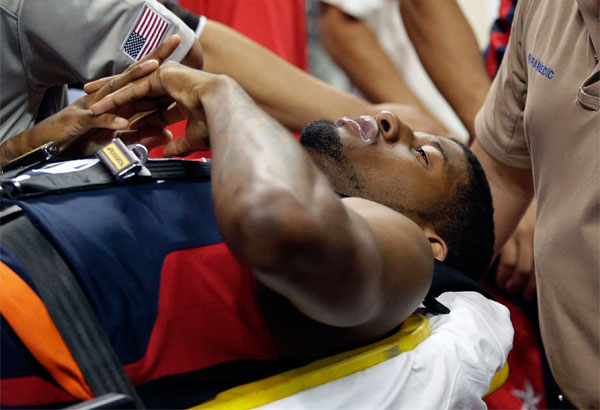 Rehab might take more than a year, and during this time he cannot return to the Pacers lineup. Paul suffered a horrible open tibia-fibula fracture on his right leg during the USA Basketball intrasquad scrimmage. Doctors are seriously questioning the chances of George ever recovering within a year. He might also never regain his full form as an NBA complete player and allstar.

The 24-year-old basketball player was resting after his surgery on Saturday. Larry Bird, the Pacers president, gave out a statement in which he says that he hopes to see George back at Indianapolis next week, before starting his rehab process.

On a more optimistic note, Dr. James Gladstone, the co-chief of sports medicine from the Icahn School says that bones can be completely fixed.

“The thing about breaking a bone is that if you get it back in the appropriate position, it can be as good as new (…) If the muscle is not involved and the bone and muscle are fully healed, then I think he will get back (to his previous form).” – Dr. James Gladstone

Gladstone is currently not treating George, but he said that fool recovery takes between 9 and 12 months, for this type of injury. This means that George cannot return before May, when the NBA playoffs will already be in full swing.

Also, if Paul George misses the entire season, he will have to wait a total of 15 months until the 2015 opening. The time estimation coincides with the prognosis of Dr. Patrick Kersey, a physician at St. Vincent Sports Performance in Indianapolis. He treated guard Kevin Ware (who suffered from a similar injury).

Kersey is not George’s physician either, but he estimated approximately 6 to 12 weeks for the complete healing of his bone, and another 6-10 weeks until George can walk normally. According to him, if everything goes according to plan, he will be back in six to 12 months, but he also stated that it might take approximately 18 months until George will regain his form.

George is not a very patient man.

“It is way too early to speculate on his return as the no. 1 priority for everyone will be his recovery (…) Our initial discussions with our doctors and the doctor in Las Vegas has us very optimistic.” says Bird

Chuck Pagano, coach at the Indianapolis Colts training camp, said that this is a devastating injury to a wonderful player. He wishses all the best to him. Pagano has also missed 13 games in the last 2 years due to cancer.

All in all, Paul George has several advantage. First of all he is in perfect health, and this will definitely speed up the healing process. Secondly, he has also become nutrition-conscious over the years, and Kersey says that this will also help with his recovery. Lastly, he has always been a tireless worker, so he will most likely work very hard to recover.

Gladstone has only one word of advice:

“The hardest part is getting the muscle memory back in the coordination sense. These guys are so finely tuned in their muscles and joints, that this kind of injury really throws that muscle memory off,”