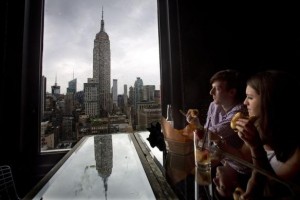 This year’s Independence Day parades were perhaps a tad less festive than usual, because of Hurricane Arthur, which literally rained on people’s parades on the U.S. East Coast. However, a Reuters report on the national small town celebrations around the country brings up all the ‘usual suspects’: picnickers, fireworks enthusiasts, parade-goers, and hot dog eating champs.

In New York, hundreds of spectators, plus a bunch of professional hotdog eaters attended the yearly Nathan’s Famous Fourth of July International Hot Dog-Eating Contest, which took place, as tradition will have it, on New York’s Coney Island. The prizes amounted to $20,000 a pop and the title once more went to San Jose, California inhabitant Joey ‘Jaws’ Chestnut, aged 30. Chestnut managed to stuff his face with no fewer than 61 hotdogs during the competition. This ensured his eighth straight win of the champion title, but it didn’t manage to break his previously set world record. In 2013, Chestnut ate no fewer than 69 hotdogs, during the same competition. His direct contender, according to reports, was Matt Stonie, who managed to gobble up 56 hotdogs during the same contest. Perhaps more notably, before the beginning of the contest, Stonie proposed to his girlfriend before a crowd of about 1,000 onlookers, who cheered the couple on. In the women’s leg of the competition, 28 year-old Miki Sudo from Las Vegas won over the reigning champion, Sonya Thomas. Sudo managed to eat 34 hotdogs in 10 minutes.

AAA estimates forecasted that 41 million people would be driving down America’s roads during this busiest weekend of the year in traffic. AAA data takes into account people who would be driving 50 miles or more away from home. This year’s estimate was up 1.9 per cent from the 40.3 million who were on the road during the same weekend last year. According to the experts, travelers are undeterred even by serious weather conditions, such as this week’s Category 1 storm Hurricane Arthur.

Several fireworks shows were, however, postponed until Saturday, because of Hurricane Arthur. Several towns from Ocean City, Maryland, to Nashua, New York, as well as most of Connecticut decided to take a literal rain check on their festivities, in hopes the weather would improve by Saturday. The famous Boston Pops Fireworks Spectacular, however, was scheduled ahead of time and did take place on July 3.

On the West Coast some festivities were postponed because of the quickly spreading forest wildfire, which took place about 35 miles east of San Diego. In its path, the fire wrecked 150 acres of forest and two homes. Local authorities canceled the parade there.