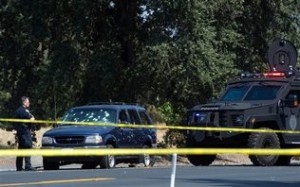 A bank robbery in Stockton, California went terribly wrong on Wednesday. Shorts were fired at people, cars and houses, a high-speed chase that ended with hostages being thrown from a fleeing SUV. Two of the robbers died and also one hostage.

Police officers responded to a call of a robbery in north Stockton, Bank of the West branch. Upon arriving at the scene, the officers saw three men take three hostages from the bank and keeping the three women at gunpoint. They then proceeded to steal a bank’s employee SUV and flee the scene with the hostages. The police pursued them for 45 minutes on the highway and city streets.

Two hostages (both bank employees) were thrown from the speeding SUV; both were shot and taken to the hospital and one only had a grazing bullet wound.

After the hostages were thrown out of the car, the pursuit continued. The robbers started firing from the SUV at the police with guns that resembled AK-47s. An unknown number of homes in the robbers’ path were suffered damages from the bullets, as well as 14 police cars.

Police Chief Eric Jones had this to say about the situation in a news conference held late Wednesday:

It was such a chaotic … fluid situation, really one of the most dangerous, tense situations that a police officer could go through. There was a lot on the line and the officers responded appropriately.

The SUV came to a halt at a street intersection after it became disabled and the police officers exchanged gunfire with one of the assailants. Jones was certain that the robbers’ intention was to kill the officers.

After the exchange of fire ended, the third hostage was found dead inside the car. One of the robbers was also dead. The hostage that was dead was not a bank employee, but a bank customer and was used by the assailants as a human shield during the shootout.

One of the hostages that were thrown out of the SUV and taken to the hospital died because of the gunshot wounds and the one who survived has regained her consciousness.

The bank released a statement in which it said that it would not provide information about the victims and had this to add:

This is a tragic incident and we are focused on supporting our customers and employees.

What are your thoughts on this situation? Drop us a line in the comment section below and let us know what you think about this.