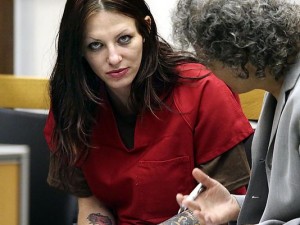 On November 23, 2013, the tech and business worlds were equally shocked with news that high-ranking Google CEO Forrest Tim Hayes had died, following a heroin overdose. Police investigations have gone on since, with a lot of high-profile attention from the media and in early July the identity of the prime suspect in the case was revealed to the public. On Wednesday, prosecutors accused Alix Catherine Tichelman, 26, from Atlanta, with manslaughter. She is being charged with having injected Hayes with heroin and then watching him die from an overdose. The incident occurred on Hayes’ 50-foot yacht called Escape, in the marina of the Santa Cruz, California harbor.

Tichelman is a self-professed lingerie model, poet, hustler, exotic dancer, makeup artist, and call girl. At the time of Hayes’ demise, the two had been entertaining a “prostitution relationship”, as per police statements. Hayes was married and had fathered five children by his wife. Tichelman’s lawyer, Diana August, did not respond to the media’s demand for comment on her client’s arrest.

Press investigations of her online presence revealed the personality of a troubled, albeit socially hyperactive young woman. On popular social networking platform Facebook, Tichelman went by the moniker AK Kennedy, and described herself as a model. She often posted self-pictures, most often very scantily clad – either in lingerie or leather and regularly sporting towering high-heeled boots. She also boasted backstage passes to concerts and professed to her status as an aspiring novelist. She occasionally posted fragments of her writings, part of a work-in-progress novel starring a female high-school student called Kat. She also wrote poetry – perhaps most notably a desperate ode titled “Heroin”. Some of the lines include: “This private downward spiral-this suffocating black hole, makes you feel so warm inside, yet makes your heart so cold. Each day takes its toll, your thoughts become emotionless, your soul feels too old”.

Tichelman was also present on ModelMayhem, a popular portal for TFCD model recruitment, where she depicted herself as a “sweet & sexy vixen”. On Facebook, she sometimes also posted about being afraid of prison and confessed she hated “stupid laws and rules”. On September 6, 2013, she had been detained for one night in the Fulton County jail of Georgia. Police held her in custody for falsely reporting battery and a crime. Tichelman was also allegedly engaged to the late Dean Riopelle, 53, owner of a music venue, who died on September 24, 2013, of a heart attack.

Her parents, who now live in Folsom, California refused to talk to the media and put up a sign on their front door asking the press to leave.