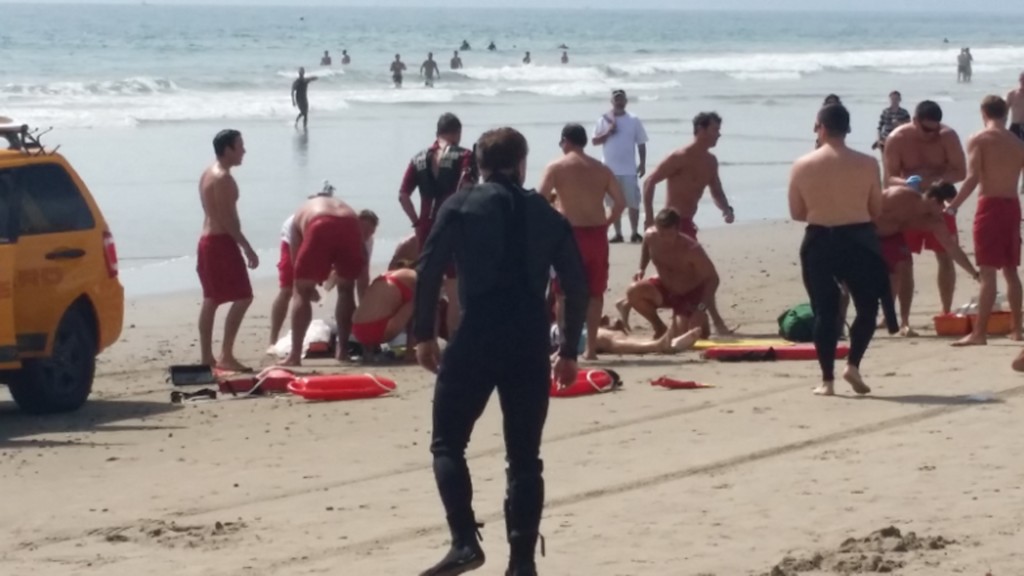 Lightning struck Venice Beach killing a 20-year old. The man died Sunday after a lightning struck 13 people at the popular Los Angeles beach. The man was taken from Venice Beach and pronounced dead at the Marina Del Rey Hospital Sunday afternoon, Los Angeles County coroner’s Lt. Larry Dietz said. Among the seven others who were also struck by lightning, apart from the 20-year old, 8 of them are in severe condition and were hospitalized. One of the 8 is in critical condition. He’s a 55-year-old male who had been surfing, said Capt. Danny Douglas, of the L.A. County Fire Department Lifeguard Division. The 15-minute storm on Sunday struck more than 20,000 people who were visiting the southern portion of Venice Beach, where the lightning hit. But the ones who were in the water were the most affected ones. “I heard this crackle and there was this giant bolt of lightning shooting across the sky and the loudest thunder I’ve ever heard,” witness Joe Doro said. “My hair was standing up,” Angelica Roquemore, another witness, explained. “You could hear everybody screaming.” The Los Angeles City Fire Department sent 47 firefighters, 8 ambulances and 5 fire engines to the 3800 block of Ocean Front Walk in Venice after receiving the first call for aid at 2:21 p.m., according to fire spokeswoman Katherine Main. Moreover, lightning also struck a 57-year-old man, who is in stable condition now, on a golf course on Santa Catalina Island, said Steve Denning, a law enforcement technician with the Los Angeles County Sheriff’s Department. The one in Catalina occurred 90 minutes earlier than the one that hit Venice Beach. The National Weather Service had predicted a chance of thunderstorms around Southern California on Sunday. Yesterday’s lightning was also blamed for a power outage that affected about 300 customers in Redondo Beach, some 12 miles south of Venice. According to Bill Patzert, a climatologist with the NASA Jet Propulsion Laboratory, the lightning strikes that hit the Southern California coast Sunday from San Diego to Venice are extremely rare. The West Coast has the lowest incidence of lightning strikes in the nation; the chances of being hit are 1 in 7.5 million in California compared to 1 in 600,000 in Florida, Patzert explained. “This was a sneak attack that took everybody by surprise,” he said. “Coastal Southern California is virtually lightning-proof. Because it’s so unusual, people are not sensitized to the dangers.” Patzert said the rare conditions would continue through Wednesday and advised everybody to stay indoors during such a storm.